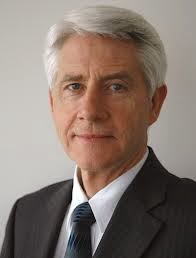 Kennedy Graham was in Invercargill this evening as part of his tour around the provinces where he is sharing the Green vision of a future New Zealand economy that could better manage our responsibilities around climate change: "The Great Transformation". 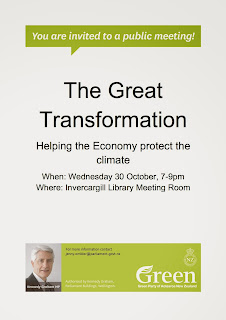 Kennedy explained how we can approach change in a more positive way, instead of avoiding the issue as the current National led Government has done. Although there is a target of reducing emissions by 50% by 2050, we have actually been seeing a steady increase. This has largely been because of the Government's disengagement and deliberate weakening of the ETS. Our current situation is dire, thanks to National we have:
The Government claims there is no point in doing much because, in the big scheme of things, our total emissions are a small fraction of the world total, but this ignores the fact that per capita we are one of the worst emitters in the world. Our clean green image is a fantasy.

With the right economic signals from the Government of the day we can turn the economy around to one that is climate sensitive without great suffering.  While as a small country our efforts alone won't save the planet, at least we will be doing our share and setting an example to others.

Here is Kennedy explaining to a Local TV journalist what it is all about, the interview starts 7:45 min in.