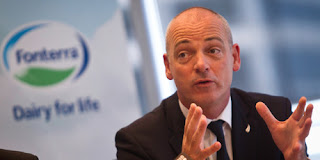 Theo Spierings has requested a salary freeze after receiving a $770,000 increase. He obviously did not turn down this windfall at the time and his request for a freeze does not include performance bonuses. Spierings' increase was based on his performance over the time of the botulism scare when Fonterra pleaded guilty to charges of poor risk management and delayed notification brought by the Ministry for Primary industries.

I can imagine the feelings of many dairy farmers who have been encouraged to increase stock numbers and production and invest in the infrastructure and inputs to support them, only to find their income slashed through a saturated commodity market. They must shoulder the risks and suffer income uncertainty while those managing their company continue to earn their million dollar plus salaries despite not protecting the company from market fluctuations. 17 of Fonterra's staff earn over $1 million and only those in the lower management positions will be likely to lose their jobs as the company cuts costs. It takes over $30 million a year to pay the salaries for the top 20 Fonterra staff. The Prime Minister's salary is $428,000 a year but over 100 Fonterra staff earn more than him. Over 300 Fonterra staff earn more than medical specialists and surgeons.


Dairy farm workers must be wondering why they work amongst the longest hours (12-14 hour days), and often below the minimum wage, when the industry can afford to support thousands of exceedingly well paid managers. The accident and death rate in the farming industry is the highest in New Zealand and the risks of working at grass roots level is obviously much greater than in a Fonterra office.

The culture of ever spiraling increases for CEOs appears to be a world phenomenon that New Zealand has also bought into. When almost 50% of ordinary workers got no increases to their pay over the past year CEOs averaged 10% increases. Spierings' increase alone was around 25 times the median wage in New Zealand. Eleven New Zealand CEOs now earn more than $2 million a year, the most to ever do so.

I find it immoral when many high paid CEOs lead companies and industries that are obviously profitable yet their frontline workers are forced to accept minimum wages and poor working conditions. The CEO for Ryman Health Care (owners of many of New Zealand's rest homes) had a $100,000 increase last year and now earns more than double John Key's salary, however rest home workers are having to take legal action to have their discriminatory conditions recognised. Kevin Hickman is the founder of the Ryman Healthcare and his personal wealth increased by $10 million to $360 million last year.

I have written a number of previous posts on the same theme of CEO salaries over the years and the trend of paying more and more to management and less to frontline workers seems to be continuing. As before I would like to promote the idea that a CEOs salary could be directly tied to the incomes of the employees beneath them. If a CEO could earn no more than 10-12 times the lowest wage earner in the company it would ensure that all would benefit from the increased productivity that they collectively produce.

anzac1 said…
Absolute shit, try getting by on $14.000 a year, even your lowest paid are very well off, Neil.