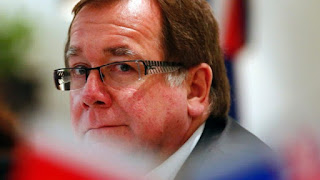 TV3s The Nation has revealed some damning information regarding the $11.5 million Saudi sheep farm deal and exposed the obvious lies that were used to justify the deal. While there was always doubt around McCully's claims that the payments were necessary to stop expensive legal action from a disgruntled Saudi farmer, Newshub journalists have further exposed his deception. The National Government was so intent on achieving a trade deal with Saudi Arabia (despite its shocking human rights record) that McCully was prepared to go to extraordinary lengths to achieve it.

There was a concerted effort from the Minister to get around animal welfare regulations in shipping live sheep for slaughter and a willingness to spend $11.5 million of public money to help influence a trade deal. McCully's actions resulted in extreme levels of animal suffering and no trade deal. To put the expenditure into perspective, this one Saudi businessman received more in bribes from New Zealand than what the Government is prepared to spend annually for emergency housing.

McCully was also behind the flawed attempt to radically change the funding and functions of the Ministry of Foreign Affairs and trade (MFAT). His bullying approach in forcing through changes, with limited consultation, resulted in widespread concern from officials and internal documents were leaked to the opposition.

McCully attacked officials for daring to question his judgment and the State Services Commission supported a witch hunt inquiry by Paula Rebstock that went well beyond the brief and targeted two officials as scapegoats. Derek Leask was one of the officials named by Rebstock and a recently released Ombudsman report has revealed that he was unfairly targeted and his career and professional standing were unjustifiably destroyed. McCully has refused to apologise.

The Panama Papers exposed the global networks involved in setting up and supporting tax havens to avoid tax and launder illegal funds. The International Consortium of Investigative Journalists, including New Zealand's Nicky Hager, investigated the leaked papers and revealed the extent of corruption. It turned out that New Zealand is widely recognised as a tax haven and our weak foreign trust regulations were actively supported by the Government. Our Prime Minister's personal lawyer even lobbied to limit stronger disclosure and ignore official advice so that local trust managers could continue to profit from the existing regime.

John Shewan's review of our foreign trusts has exposed the deliberate misinformation provided by John Key and his Ministers in defending their oversight of the foreign trusts. The Listener highlighted the extent of the lying and "half truths" in Ron Pol's myth busting article this week.

Journalists have made a reasonable job of investigating and reporting on all three stories and I think that on the whole the public perception of journalists as untrustworthy is unfair. I believe that the environment that journalists now have to work in has changed considerably and this has reduced their effectiveness to hold politicians to account.

In all of these stories journalists have provided strong evidence of unethical behaviour, deliberately misinforming the public (lying) and considerable conflicts of interest. In the past, similar revelations would have resulted in public apologies, resignations and destroyed careers, but no longer. Major political stories now have a fleeting life and barely resonate amongst voters. The commercialisation of our media has resulted in serious news stories competing with social gossip and programming that chases ratings and profit as a priority rather than providing a public service.

New Zealand is one of the few countries in the OECD where state owned television is expected to run a purely commercial operation. While Radio New Zealand still provides a public service it has been increasingly hamstrung by an ongoing funding freeze.

When one compares the behaviours that resulted in Lianne Dalziel's and Kate Wilkinson's resignations with what Ministers are currently getting away with, there is cause for concern. McCully's unethical behaviour and irresponsible use of public funds are serious enough for him to be forced to leave parliament altogether. Instead an inquiry into the Saudi affair is not progressing with any urgency and he has largely rejected the findings of the ombudsman. The PMs conflict of interest in supporting his personal lawyer in lobbying a junior Minister and his Government's disregard of advice to tighten foreign trust disclosures has badly damaged New Zealand's international reputation.

We have reached a point where our fourth estate is no longer able to effectively hold the Government to account and Ombudsman reports (and therefore the Office of the Ombudsman) are not being properly respected or acted on. Given also the shocking management of our housing crisis, the growing numbers of New Zealand families being forced into poverty and the undemocratic veto of the Parental Leave Bill there is a clear case for the Governor General to activate his reserve powers. The only way to deal with this level of corruption and incompetence is to declare the dissolution of Parliament and to call new elections.

bsprout said…
There will always be more...