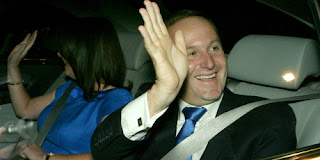 The defining element of John Key's reign as New Zealand's 38th Prime Minister will be his ability to maintain a high level of popularity while dogged by scandal and having few lasting achievements. He should be recognised for his political instincts and ability to steadily push through National's agenda while avoiding blame for numerous failures. The title "Telfon John" was one of the few things that stuck. Key's major effort to achieve a legacy for himself was to push for a new national flag and it failed dismally. His resignation may indeed be for genuine reasons, like spending time with his family, but the timing is also clever because the underfunding of Government sectors is going to be seriously exposed and the housing bubble is close to bursting. Key's money trader instincts are highly tuned and I'm sure he smells disaster ahead.

Under Key's watch our public debt has increased from $10 billion in 2008 under Labour to almost %70 billion now. Cutting income taxes for the already wealthy, not implementing a capital gains tax and refusing to effectively deal with corporate tax avoidance limited spending across Government sectors to achieve a surplus. Conservation has suffered badly after successive cuts and both health and education have experienced funding shortfalls over the past 8 years and many social services have been cut altogether.

John Key has been a prominent international leader because of his easy manner and willingness to pander to big business and big Governments. One of the most popular speeches online regarding the Prime Minister was one by Green MP Gareth Hughes where he listed Key's many failings.

Under Key we have seen...

Some positive things have occurred under a John Key led Government including the change in legislation to allow same sex marriage and over 300,000 houses insulated. However neither were instigated nor championed by National.

The Green party refused to congratulate Donald Trump as President Elect because of his shocking and extreme stances during his campaign and I find it difficult to thank John Key for his service when majority of New Zealanders have seen a reduction in services and diminished quality of life, while an elite few prospered hugely. Under Key it has been the very rich in NZ who have really benefited, with many seeing their wealth increase annually by over 20%. While John Key claimed, after his victory in 2014, that he would govern for all New Zealanders, the evidence has been otherwise.

cricket? said…
Couldn't agree more except to add he is the least kiwi pm we've ever had in my life time and the most corrupt an uninspiring
February 17, 2017 at 12:17 AM