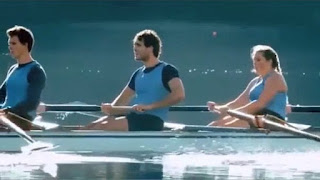 The National Party had a glorious win against all odds in 2014. Despite Dirty Politics, and the exposure of their dubious underbelly, they ran a smart campaign. The image of National's rowing eight pulling ahead of a disorganised tub full of opposition parties (paddling furiously in different directions) was powerful. The advertisement was backed with the driving beat of some very familiar contemporary music.

It is ironic that the flash video actually represents the reality of National's governance (mostly smoke and mirrors): the rowers are all on steroids, the boat's maintenance has been underfunded and we all know about the lack of due diligence in obtaining the outsourced music (pretty legal isn't good enough).

National's economy is on steroids, the regular injections of property investments, farm fertiliser and immigrants may artificially lift performance, but the side-effects are becoming obvious and a physical collapse is looming. This is not a sustainable programme for a race that is actually an ultra-marathon, not a sprint.

The National Government has been spending most of our money on corporate boxes and a few elite athletes. It has ignored investing in the grassroots and the next generation. If we continued with the rowing analogy, then the river (the economy) is becoming clogged with pollution and weed and the rowers would struggle with the changing conditions of flood or drought. Although the waka is designed for eight, a shortage of boats will mean that they will have to squeeze in extra people.

On the other hand, Labour and the Greens have agreed to co-operate and are rowing in the same direction. Both parties have high performing athletes who are steroid free and well prepared. Natural foods rather than tinned spaghetti will fuel the team and running uphill is part of the training. Unlike National we have a number of talented locals who are more than ready to provide the backing music for a strong campaign and a brighter future.

Bioneer said…
In a rare move they offered us the win last time but we weren't able to capitalize. I think if we are offered the win again this time (there's enough anti-govt. sentiment already that we could be) we would still lose again if we don't capitalize again.
May 20, 2017 at 11:50 AM

bsprout said…
I agree, Bioneer, that the opposition lost the last election. There was no sense of a viable alternative to National when the rival parties appeared dysfunctional and lacked unity (Kim Dotcom and all that). My concern is that this election will become another presidential competition (comparing English with Little) when we know that Government is about the sum of parts and good policy. Combining the talent that exists in both Labour and the Greens easily outweighs the arrogant, visionless National crew.
May 20, 2017 at 12:17 PM