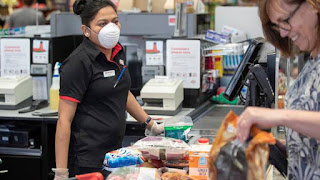 The Covid-19 lockdown has enabled us to examine work, social inequities and essential infrastructure from some useful perspectives.

The first observation was regarding our ability to manage a national health crisis. I remember an interview recently with a surgeon who became emotional when describing his relief that we had managed to avoid a total collapse of our medical system (a real concern). If we had not locked down as soon as we had, it would have revealed how little real capacity we had in the system.

The lack of investment in our hospital infrastructure has meant we are now ranked in the bottom 25% in the OECD for beds per 1,000 people. For example we have 2.6 beds for every 1,000 inhabitants and Italy (which was overwhelmed) had 3.2. Germany (with 8 beds per 1,000) has coped well with the sudden increase in patients and its death rate is well below Spain (3 beds) and France (6 beds). Before the pandemic our hospital system was already struggling to meet demand as our population increased, became older and diseases like diabetes reached crisis levels.

One positive that did occur regarding infrastructure, was the easing of the homeless crisis. Those previously struggling to find rental properties, or forced to live on the streets because of the lack of social housing, discovered airbnbs suddenly becoming available to rent long-term and moteliers gladly opening their empty units to homeless individuals and families. There were around 1,000 rough sleepers in Auckland alone and to have most housed should make a huge difference in lifting their circumstances to one where they may be able to make permanent changes for the better.  This will also allow some breathing space to get on top of the housing construction shortfall.

We can see for ourselves, from what is occurring in other countries, that we only just missed a major catastrophe through an early lockdown. The value of a well functioning public health system has been well established when viewing what is happening in the United States. When a population is reliant on for-profit health provision there is a reluctance to do what is really necessary if it negatively impacts shareholders and certain demographics (Blacks, Latinos) fall through the gaps. Socialised systems allow for cohesive action, while systems reliant on multiple businesses and insurers, and through complicated supply chains, are doomed to fail in a crisis.

The inequities within the US society are easily revealed when looking at the ethnic breakdown of Covid deaths. Blacks have died at over double the rate of white citizens. Of course, it is not just the medical system that had an impact but the fact that blacks are more likely to live in crowded homes and were forced to continue working with few protections. There could have been similar inequities in New Zealand as our Maori and Pasifika communities experience similar challenges as the Blacks in the US. However, the current infection statistics have shown that ethnicity has not been such a defining factor here.

Serious inequities in New Zealand were revealed, however, when regarding education and work.

When students were forced to stay at home and connect with their teachers online it revealed that around 100,000 students had no internet. In one school, 65% of students had no access to wifi or a connecting device. This reality had been known for some time and had been ignored as our education system had developed into one of the most unequal in the OECD under the previous government. There is a growing gap, not only between the resourcing of schools, but in what homes can provide for supporting learning.

The realities of living and working during the lockdown were also different depending on income and type of job. Those in white collar jobs, or the 20% most affluent, were more likely to be able to continue working and to do so from home. This was revealed through cellphone data derived from tracking movement. Those in the top 20% had an almost 50% drop in general mobility, while those in the bottom 20% were around 25%.

The work deemed essential was a bit of a wake up call, because a good percentage of our essential workers were our lowest paid (or even volunteers) and yet were forced to expose themselves to possible infection to carry out their jobs. Most had no access to personal protection equipment (PPE) and had to continue working as cleaners, care givers, rest home workers, waste collection, mail and goods deliveries, supermarket workers...and if the virus had spread we would have been reliant on volunteer ambulance staff and firemen.

Those most likely to lose their jobs will also largely be those on minimum wages within service industries, especially those connected to tourism.

I recently joined a webinar where the Infometrics Senior Economist, Brad Olson, shared his thoughts on our economic situation in the short and medium term. The importance of retraining for many workers was discussed and Brad was asked what industry would be offering the most jobs when considering courses and qualifications, he thought there could be many jobs related to social services.

When we look at an economic recovery post-Covid, there will clearly be a focus on the construction industry and other "shovel ready" projects (hopefully most will have climate and community resilience criteria applied). However, if we really want our domestic economy to thrive in the short and long term, then valuing all our essential workers from now on, with appropriate recognition and remuneration, is essential.

Last year Wall Street included New Zealand amongst the 15 countries that had the widest gaps between rich and poor. When looking through the list, levels of unemployment were not considered an indicator of wealth distribution.

"Higher labor force participation can help drive down income inequality as a higher share of working people can reduce the poverty rate and shrink the gap between rich and poor. Yet this is not the case in New Zealand, which still has among the highest income inequalities despite having one of the highest labor force participation rates. More than 70% of New Zealanders aged 15 and older are in the labor force –- the second highest rate among OECD member states and affiliates"

New Zealand does not have a large number of "lazy dole bludgers" as many right wing commentators promote. We probably have one of the harder-working labour forces in the OECD and many are actually underemployed and actively looking for more work. We also have amongst the longest working hours on average. In an earlier linked Stuff article cleaner Rose Cavapalu was featured. Rose is a cleaner who works two jobs and averages 65 hours per week. Her working day starts at 7:30am and finishes at 10:30pm. It took two jobs and long hours to cover basic necessities.

The financial benefits of New Zealand's economic growth leading up to the pandemic were not evenly shared. From 2015-18 the richest fifth of households saw their net worth increase by 26% while those in the bottom fifth probably saw their net worth drop. The living wage is currently established as $21.15 an hour and yet the minimum wage is set at $18.90. The youth rate or "starting out" wage is $15.12 an hour. The richest 10% in New Zealand have captured 53% of the nation's wealth. Many of our richest individuals own supermarkets and rest homes that provide great returns but employ essential workers on the lowest wages possible.

If we are to give a boost to our domestic economy there needs to be a redistribution of wealth that better reflects the value of essential work. I was really pleased to see that the government has not been forthcoming in supporting landlords who have profited hugely from increasing rents and pocketing largely untaxed capital gains. The wealthy spend much of their disposable income on overseas luxury items such as new cars or international travel, while the average worker spends almost all their income on essential items and services from local businesses.

The lockdown also revealed that a good number of jobs could still be done through more family friendly, flexible hours. Many workers struggle with family commitments and work. New Zealand's low productivity is an ongoing issue and flexible hours and the ability to work from home may help address that. Removing the costs and time spent traveling, reducing workplace running costs, and  opening the door to many high qualified workers currently excluded because of inflexible hours must make a difference. For many sole parents(mainly women), more flexible hours may allow them to better use their skills and experience and increase their household incomes. A high percentage of our poorest families are sole parent ones.

The budget has set aside $15.9 billion for supporting jobs. The details behind what it will really involve have still to be fully determined. I would hope that we can finally address the issues that the pandemic helped highlight:
It would be great to have some specified targets to address goals such as these to best track progress. There is always the concern that the same people who have profited most from the pre-Covid economy will soak up more than their share when the $15.9 billion is distributed. Perhaps we should be scrutinising the luxury car market as one indicator.