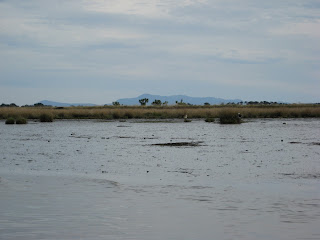 The lower part of the Waihopai River that is rapidly eutrophying, 3 hectares of eutrophic mud has become 123 hectares in the last 12 years.
The editorial in Saturday's Southland Times was an excellent one. The rapidly deteriorating state of our estuaries can't be ignored any longer. Eugenie Sage has already spent time looking first hand at the issue and talking to those who have the daunting responsibility of leading the rescue. However, it is the Government who should be making clean water an even greater priority and providing more support for struggling regional councils. If we are going to make a significant difference in the little time we have we need stronger national standards for water quality and more incentive for farmers to clean up their act.


Anyone who regards the warnings about Southland's sick estuaries as alarmist should take their head out of the sand and insert it into some of the eutrophic nastiness of Daffodil Bay.
Such a popular recreational area, it is now redolent of Rotorua and not in a good way.

Increasingly, large parts of Invercargill's New River and Riverton's Jacobs River estuaries are in gasping ill-health to the extent that a report commissioned by Environment Southland concluded last November that both face the same potential fate as the Waituna Lagoon as algae growth and sediment increase.

That mess from nomadic nutrients and that hydrogen sulphide rotten-egg smell caused by matter breaking down without oxygen are not to be dismissed as just Mother Nature at her less picturesque and fragrant.

Something is ecologically crook.

The natural estuarine life is all but absent from eutrophic areas that have been expanding scarily.

The blighted area from the New River Estuary's Waihopai Arm was three hectares 12 years ago. Now it is 123ha.

The finger of suspicion points at farming. In a social sense, it doesn't just point - it jabs farming rudely in the ribs. However, there's still scientific work to be done and we should not forget that general land use, stormwater and sewage are also issues. Environment Southland's specialist consultant, Wriggle Coastal Management, continues to work to find the upriver source of most of the nutrients.

This week, flood levels have been stirring things up even more. Environment Southland reminds us that a flood could move more sediment in a few days than the norm over an entire year.

So it's appropriate that a great deal of monitoring has been under way.

If there is an increased sense of urgency about all this, then good, given the political eddies that have allowed such major land-use changes to happen in an absence of comprehensively informed and reliably implemented national environmental standards.
We all understand that the problem is not only confined to our province or our country, but that must not mean that we should fail to act on our own behalf.

Admittedly, there has been action or activity, anyway. The final report of the Land and Water Forum released last year identified a need for better collaboration.

If this was met with heaving sighs, then it's little wonder, since the call - made in the last of, what was it, three reports? - was itself downstream of the big National Policy Statement on Freshwater Management, not to mention the Irrigation Acceleration Fund and the Fresh Start for Freshwater Clean-Up Fund.

At local level, a tough call was necessarily made, as Environment Southland introduced new resource-consent requirement for dairy conversions. It was a good move, given the accelerating problems.

The council has welcomed the endorsement from the forum that regional councils are the managers of water quality and quantity, albeit with concerns that inevitably and justifiably come from local government that the Government's view of collaboration be one that does not only place requirements on councils, but also provides appropriate resourcing.