- June 05, 2013
The 2013 Green Party AGM and conference was held in Christchurch, the shaky but resilient city. It was a great four days of reconnecting with friends from around the country, meeting amazing new members and appreciating the growing strength and resolve of our party. The theme of our conference was "Local Democracy and Resilience" and we were introduced to some of the strong local body candidates that we will be fielding around the country under the Green banner. We also had an evening presentation on the strength of Christchurch communities and some of the innovative solutions that will assist the recovery. 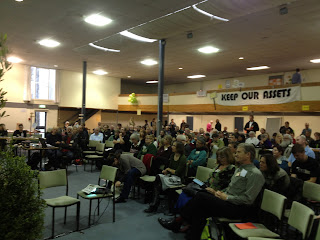 We elected the co-leaders or convenors of the three strands of our Party, the Parliamentary Caucus, the Policy Committee and our Party Executive. The fact that our members elect our leaders on an annual basis means that there is a yearly performance review for those who hold the positions and the wisdom of our choices tends to be affirmed when there are rarely major changes.

Our Parliamentary Co-leaders Russel and Metiria were elected unopposed as their confidence and capability is being demonstrated on a daily basis. While those who oppose us predicted the demise of the Party with the loss of Rod and retirement of Jeanette it has now been seven years since Russel was first elected and four since Metiria joined him and the party has never been stronger or polled higher. Our Party is bigger than any individual person, but our people are amazing. If Russel or Metiria were to leave for whatever reason, we have many who could step up and do the job. We are the third largest party and justifiably so.

The collaborative strength and capabilities of our MPs were emphasised when they shared aspects of their work with us and answered questions with candor and humour. Kennedy Graham was nominated as being the wit of caucus and Catherine Delahunty as the most mischievous. Their workloads were enormous but their dedication and energy to do the mahi was obvious.

A possible new MP was introduced to us when Marama Davidson took the stage. Marama is the Green candidate for the Ikaroa-Rawhiti by-election and her credentials as an activist and advocate for the environment and the oppressed are legendary (a real wahine warrior). Her performance in the Native Affairs debate already makes her a leading candidate.

Our Co-leaders' speeches were very different in nature and were received very differently. Russel's pushed the boundaries of our Party's values when he directed a strong attack against the Prime Minister by accusing him of being as divisive as Muldoon. This caught many people by surprise and much self righteous and anguished comments emanated from mainly right-wing commentators who expect us to continually turn the other cheek as they abuse us. I felt Russel's speech was essentially a "the emperor's got no clothes" moment. Key drapes himself in a cloak of folksy amiability while ripping off the poor and secretly supporting his wealthy mates. It was time that his spin doctored covering was revealed for what it is.

Metiria used the conference to announce the Green's "nurses in schools" initiative, that hopes to provide a system of early intervention for those children suffering the health effects of poverty. Having nurses working full time in low decile schools will ensure that more children will be healthy enough to fully engage with their learning. For every dollar invested in this scheme it is estimated that $8 will be saved in health costs later on. In other words if $30 million is invested it will be saving the Government $240 million and go a long way to lifting the tail underachievement. This initiative has been applauded by health and teaching professionals.

The AGM itself focused largely on a number of remits that sought to get wider discussion and support for remits before they get to our national forum. Despite the excellent work that had been already done by our Standing Orders Committee and our Executive, it was impressive to see how our consensus based process shaped the wording into even more effective rules.

We also thanked and farewelled Eric Turner the retiring editor of our membership magazine, Te Awa. Eric has held the position for over seven years and the quarterly journal has become a highly regarded source of information and party news. I now have the privilege of replacing Eric as editor, together with my co-editor Jane Young (it took two of us to replace him), so I may not have as much time to blog. 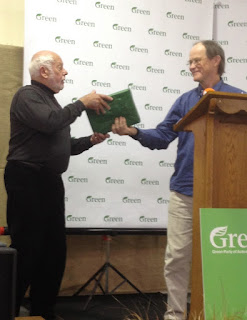 Eric receiving a bound copy of all the Te Awa issues he edited.

The rest of the conference involved the caucusing of different networks and interest groups, a fascinating workshop that simulated possible coalition negotiation scenarios and workshops to support next year's campaign teams and potential candidates.

Interestingly elements of the media still chose to fanatically concentrate on the stuff that supports the cliched Green image. My friend Frankie, who was the only one with dreadlocks amongst the 200 plus attendees, found television cameras focused on her and there was shot of us singing a waiata at the beginning. We had an attendee with an allergy to strong perfumes and a request to show consideration was ridiculed. In reality our party has a diverse membership with numerous networks from our Pasifika Greens and Spirit Greens to our Business Greens and I spoke to a member who was thinking of forming a rural network to connect our rural and farming members.

Some years ago I likened our Party to being structurally sound (the skeleton and the bones were well formed) but lacking the muscle and flesh to have real strength and connectedness. We now have the people and skills to provide the muscle and capability to operate as a major political party, we are financially in good heart (without corporate donors) and are able to employ staff to co-ordinate important activity. Our capability was especially shown we collected far more signatures than our other Keep Our Assets partners. Roll on 2014!

Hawkes Bay Greenie said…
You've expressed my views about the weekend very well. Thanks for that.

Armchair Critic said…
Sounds great Dave - did you attend the conference? On other blogs you seems almost apologetic for Dr Norman's behaviour. I'd not bother, it's nice to have a politician who speaks their mind.
June 5, 2013 at 9:31 PM

bsprout said…
Armchair, I did indeed attend the conference and had a minor facilitation role.

I haven't apologised for Russel's speech but have expressed concern that things have got so bad that it was necessary.
June 5, 2013 at 10:42 PM

robertguyton said…
Bolshy Greens are harder to handle than Compliant Greens, Dave.
The win elections too.
June 6, 2013 at 10:49 AM

bsprout said…
I think Metiria has got the mix about right in the house, firm, direct, not accepting nonsense and with an element of humour.

The self righteous indignation from the right that resulted from Russel's speech is highly entertaining.

It is fair enough for them to label us as, watermelons, far left and wacky, but to compare Key with a past National leader is a personal attack beyond the pale.

bsprout said…
Metiria's speech on Charter Schools questions the motives behind the setting up process and the honesty of those involved: http://www.youtube.com/watch?v=zK0AWgFqZPE&feature=player_embedded

It resulted in a sexist response from John Banks: http://www.youtube.com/watch?v=mt2WyqhbucY&feature=player_embedded

Armchair Critic said…
Indeed it will be exciting. I see Trevor Mallard and NZ First just walked out of parliament.
June 6, 2013 at 2:33 PM