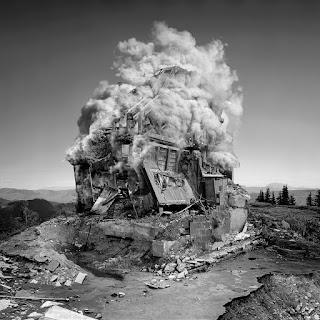 Each question time in Parliament sees a more desperate National Party as mistakes and bad legislation become harder to defend. The arrogant, dismissive answers of the past are less confident and a slight shrillness can be detected. It is also becoming more evident that National's caucus lacks depth and competence and is being held together by a few. To top it all National's coalition partners are evaporating.

John Banks was obviously the first to falter, even if he survives his current trial his reputation has taken a severe hit and the Act Party is almost a memory only.

The Maori Party has practically lost its mana from being National's lap dog for too long. The once respected Pita Sharples appears to be more interested in the baubles of office than opposing legislation that is forcing his people into into deeper poverty. Disillusioned Maori are leaving the Maori rolls in despair and those with political ambition are returning to Labour or switching to Mana or the Greens.

United Future was always Peter Dunn but recent developments have seen his Party die due to lack of numbers and the previous "Mr Commonsense" has had to resign as a Minister through a bizarre lapse of judgement. It is now unlikely that he will get enough people to get United Future reregistered and his own future as an MP seems all but over.

It is highly possible that National may still get more votes than other parties in 2014, but as the only substantial party of the right it will not have enough to govern alone. Their brief flirtation with the Green Party in 2011 has been abandoned and they now spend more time attacking the Greens than Labour. Their only options now are New Zealand First or the Conservative Party and, given the unpredictability and polarising nature of both Peters and Graig, this must be a little galling.

National were re-elected largely because of John Key's popularity as Prime Minister, however his teflon suit is losing its sheen as more people are becoming aware of his unseemly behaviour in the House and his re-occurring memory lapses. His penchant for using legal technicality rather than ethics when guiding major decisions and his dodgy back room deals are even causing discomfort for National supporters.

Deputy Prime Minister, Bill English, lost much respect early on when it was revealed he was double dipping regarding his housing allowance. His lack of judgement in the GCSB debacle and being one of the Ministers who signed off the Novopay implementation has not helped him either. While English is still regarded by many as a competent Minister of Finance, he is struggling to convincingly answer Russel Norman's probing questions. His obsession with "balancing the books" is the causing much collateral damage.

Gerry Brownlee has not provided strong oversight of the Christchurch recovery and we have regular revelations of a struggling EQC and families suffering great hardship through unnecessary delays. When the pressure is on, Brownlee tends to lash out at critics rather than addressing the concerns.

We are seeing numerous National Ministers struggling with their portfolios and needing support from "Mr Fixit", Steven Joyce. Hekia Parata has rarely put a foot right as Education Minister and has been forced to backtrack on many decisions. Her ongoing refusal to follow good process or properly consult have seen judicial reviews and Ombudsmen findings come out against her. Despite her evasive answers and ability to speak extensively without providing anything of substance, Key insists on calling her a great communicator and still supports her as Minister.

National is desperate to achieve something positive for other than the top quintile of earners, who are the only group really benefiting from this Government. It is only the fact that that their spin is still being largely accepted by the MSM and that Labour is struggling to fire that they have managed to continue polling in the mid 40s.

All of National's election platforms are shaky or collapsing:


National is desperate to label the Greens as supporting far left economic policies but it is becoming increasingly evident that the rest of the world has shifted while National stubbornly holds onto failed Neoliberal ideas. 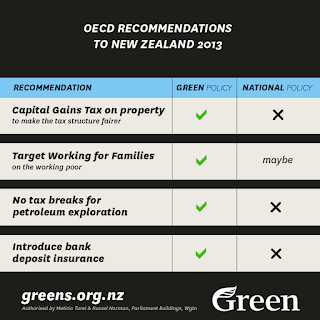 Any minor economic recovery or increase in jobs is occurring despite this Government, not because of it,  and this National led Government is rapidly imploding through the weight of its own incompetence.

robertguyton said…
Dunne resigned over this issue yet English pretended his 'housing' rort never happened.
Who is the more scurrilous?
I'd love to read a letter to the editor, comparing the behaviour of the two men.
June 8, 2013 at 4:47 PM