The Greens are wacky? 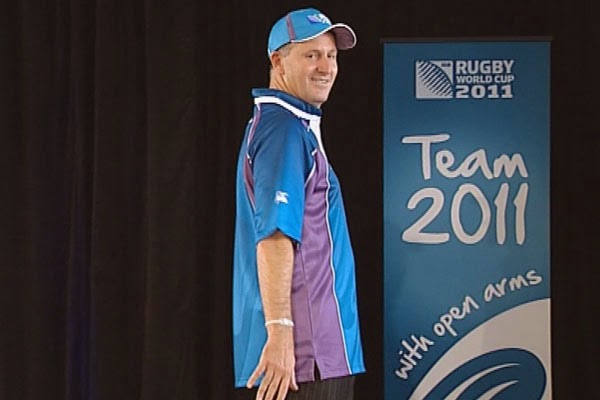 It is a bit like a game of pin the tail on the donkey, the National Government and their supporters are desperately attempting to stick the wacky label on the Greens again, but it is becoming harder to make it stick. National has great difficulty dealing with a stronger and more credible Green Party and Key himself has admitted that Green MPs provide a challenging opposition, "They go hard, they go really hard..."

Green Party policy has a strong base of research and evidence and anyone who took the time to view our full policy documents during the election campaign would have noted the comprehensive referencing. We were the only party to have our fiscal costings independently analyzed and made that analysis publicly available.

Steffan Browning's support of an online petition was unfortunate and has been leapt on with great enthusiasm as clear proof of craziness. Although the Greens have no policy to support homeopathy (and unlikely to) and Browning himself has withdrawn his support of the petition the hysteria around this will probably continue for some time.

The National Party have the advantage of winning the election through the popularity of its leader. As the incumbent conservative party, National's policies actually represent failing ideology that has become familiar to many (the devil you know...). Anything outside of current practice can conveniently become labeled as crazy.

A deep breath, less hysteria and a little bit of thought will reveal which party is really the wackiest.

Surely a party that continually denies the seriousness of climate change and does little to reverse New Zealand's growing greenhouse gas emissions is a little wacky.

A government that wants to spend $13 billion on motorways when traffic volumes have flatlined and demand for public transport has grown is wacky.

Refusing to measure child poverty so that targets can be set and progress tracked seems worryingly wacky.

Artificially supporting a dying party that struggles to get 1% and has had numerous MPs not meet basic standards of conduct is wacky.

John Key claiming to want a world without toilets is actually very wacky.

For the Prime Minister to have a close relationship with the most unprincipled blogger in New Zealand must be wacky.

A party that had three Ministers decide that Novopay was good to go took wacky to new and expensive levels ($43 million).

Gerry Brownlee's slagging of Finland was a definite leap into the world of wacky.

The Anne Tolley and Judith Collins joint attack on Metiria Turei's clothes was straight out of a wacky pantomime.

For Key to continue to back a Minister who has very little public support, has had two decisions reversed through legal action and cannot build a working relationship with the sector she is responsible for, is super wacky.

If I were to suggest replacing an experienced electorate MP, who happens to be the deputy leader and Finance Minister, with a 24 year old who thinks lobbying for a tobacco company provided him with legitimate and useful experience is a good idea...(wacky?).

Steffan Browning is a hard working MP who has held the Government to account for regulations around food safety, its underfunding of biosecurity and unnecessary spying. I was pleased that Steffan was able to get back in as our 14th MP and I am sure he has learned a valuable lesson about late night signings of online petitions.  I think people should be more worried about a party that selects MPs who go beyond the odd miss step and nearly every step becomes a concern. The misuse Parliamentary credit cards and bullying waiters move way beyond the signing of an online petition to me.

I know where I would pin the 'wacky' tail, and it does rhyme with donkey...

What part of the GP vote share does not resonate.

The GP are getting a number of votes from people who erroneously believe you still stand for environmental protection in spite of the obvious fact among thinking voters who understand there has been a significant shift to hard left welfare based socialist policy.
Just as a significant number of voters who give their support to NZF in the vain hope of "honesty"

Your list above is predicated on populist mantras that sustain your party philosophy.

Your bullet point claims are quite humorous if the false premise underpinning them is ignored.

Man made impact on our changing climate is the big issue, bollocks.
GP support for taxpayer funded "public Transport when the leadership of GP show scant regard for ways to avoid including themselves within the clear inconvenience involved.
Throwing more money at dropkick parents to solve the problem of children in want.
Understanding the salient fact that MMP delivers an opportunity to garner support from the extreme right is pragmatic for a center right government.
Toilets????
The most "unprincipled blogger", do you ever read the Standard or The Daily Blog, and Hagar is so principled eh.
The Government that set out on the Nova Pay saga and the party that enabled it to be in power.
I agreed with the attack on Material Girls foray into high price fashion it was dripping with hyperbolic materialism enabled by the totally excessive salary vs rewards.
God there is a rugby game coming up and that is the real world.

Browning,s stupidity and the embarrassing retreat is only a glimpse of the malaise that will ensure your party which might reach high teens when the NZLP is in crisis remains. Means nothing.

Browning would be looking for another job had we declined to accept votes from people who merely hold a passport and have no skin in the game while others build a safe place for them to retire to.

Your descent into puerile messenger attack in the last line of your post says so much about your sad view of the world .

bsprout said…
Gravedodger, you have excelled yourself with your stream of ill-informed opinion and regurgitated spin.

National is the Party that supports corporate welfare and big spending.

Subsidies and tax cuts get thrown around to sunset industries like oil and coal and we saw Solid Energy crash, $400 million in debt and hundreds unemployed. Tiwai, Warner Bros and Kidicorp are all highly profitable and yet all get tax cuts and subsidies from the Government. Kidicorp is a classic, where it falsified records to claim $1.6 million of the Education Ministry for nonexistent teachers and yet is the provider of choice for subsidized early childhood centres in low decile communities.

Rather than expect business to pay living wages and let market forces determine rental costs, the Government subsidizes low waged workers with Working for Families (around $3 billion a year) and the accommodation supplement effectively subsidizes landlords.

Government debt has risen from $10 billion to over $60 billion since 2008. A shocking increase, especially when the economic recession was well and truly over for the rich in 2011. Three years since and no reduction in Government debt and no trickle down. http://www.therichest.com/rich-list/nation/nbr-rich-list-2011/

The Greens want to focus spending on areas that produce a real return (investment rather than mindless spending). Our full fiscal costings for our 2014 election priorities had larger surpluses and we were able pay down debt sooner than National. I don't believe you have actually looked at our policies.

Shifting families and children out of poverty and providing healthy homes and lifting wages is actually fiscally smart. There is a huge economic drain (health and education costs etc) in supporting families on low wages and living in substandard housing.

Poor families are getting poorer, we have a growing shortage of homes and more and more families are living in cars, garages and caravans, too many are sharing homes in overcrowded situations. Housing continues to be over priced and power costs cripple many families renting poorly insulated houses. You appear to be claiming that spending money to solve these problems is a waste, but every child living in these circumstances will be so damaged by their early living conditions that their ability to contribute to society in the long-term will be limited.

Judith Collins' rejection of the Electoral Commission's recommendations to improve MMP was appalling. The Conservative Party got almost 4% of the vote (and almost 100,000 votes), but got no MPs in Parliament. National gifts a discredited party (its past leader convicted of fraud), that got 0.6% of the vote, a seat in Parliament and makes the resulting MP Associate Education Minister. National understands what is legal, but not ethical. Judith Collins' behaviour is far more questionable overall than Steffan Browning by far. She was totally driven by self interest and has treated huge numbers of people appallingly, especially sexual abuse victims (denying changes in the justice system that Simon Power had been advocating).

To claim that Slater is just the same as bloggers on the left is laughable. There is a difference between robustly expressing political viewpoints and being a hired hit man. Slater's willingness to be paid for putting his name under slanderous attacks against those who oppose the government or the alcohol and tobacco industries is about as low as you can get.
November 2, 2014 at 10:17 AM