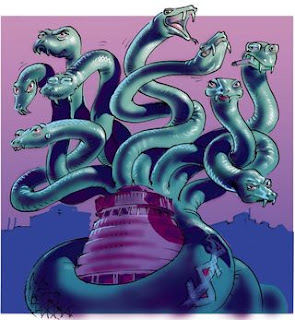 The National Party is fortunate that ethics play little part in their governance style. Why tell the truth and be upfront when you can remain in power through misinformation (lies), withholding OIA responses and well prepared spin?

The Prime Minister now has several press secretaries (when previous Prime Ministers just used one) and more is being spent on PR advice or spin doctors under this Government than policy analysis.

Things have not gone well over the past week, the $11.5 million non-compensation payment to Mr Al Khalaf has continued to cause problems and Solid Energy's collapse under National's watch is also embarrassing. However, as this Government knows anything can be solved with good spin.

There is absolutely no evidence in the documentation that the actions of the previous Labour Government forced National's hand to payout the Saudi businessman, however, repeating it often enough soon has the idea imbedded. After every question relating to the deal, Key responds with the claim that they were only fixing Labour's mess. Poor Minister McCully had little choice but ignore the advice from Treasury and the Auditor General to placate the angry Arab.

Bill English may have encouraged Solid Energy to borrow heavily so that they could pay a higher dividend to the Government but according to him and Key it was an unexpected drop in coal prices, "the perfect storm", that brought the SOE down. They ignore the fact that for a company operating in fluctuating commodity markets, carrying a high level of debt is very unwise when prices could easily drop.

I have heard that the humming and heat emanating from the Beehive recently is at a much higher level than normal as the PMs spin doctors are working long spinning hours preparing him for the meltdown ahead. Some extraordinary responses will be needed as the global dairy collapse deepens, the Christchurch rebuild slows and the housing bubble inflates to gigantic proportions.

Based on the successful spin of the past I can predict what we will hearing from the Government as its revenue drops, farmer suicides increase and child poverty and homelessness grows:

"We are still trying to fix the problems created by Labour."

"It's the doomsayers from the Greens and Labour who are talking the economy down!"

"Dairy prices will improve again, our farmers are the best in the world and are very resilient."

"We dispute the statistics on child poverty, we have also increased benefits more than any previous Government."

"We were close to getting a balanced budget, but who would have predicted the dairy downturn?"

"Ministry and department CEOs deserve their pay rises because they are having to make tough decisions to manage within their reduced budgets."

"We are have decided to replace all DHB boards with commissioners because they have failed to work within the new budgets and properly prioritise services."

"The TPPA will deliver much greater trade opportunities and the 10% increase in prescription costs is a small price to pay."

"New Zealand Post is reducing mail deliveries to one day a week because there has been a 2% drop in mail volumes, this is just a reflection of the reality of changing communications."

"The fact that the median house price in Auckland is now over $1 million is no cause for concern, it just confirms Auckland's place as one of the most popular cities in the world to live."

"Central Auckland businesses should not have to deal with the daily mess left by the increasing numbers of homeless so we are passing a bill under urgency to deal with these people who choose to live this way."

"It is just racism when people complain about the Chinese buying up our dairy farms, they bring useful investment and providing jobs in a struggling industry."

"Experts support that it is the teacher, not the class size, that makes the biggest difference to children's learning and by increasing the class sizes to forty we do not need to build more classrooms in Auckland. This will actually raise attainment despite a reduction in the education budget."

"We are increasing funding to private schools and allowing 50 more Charter Schools as they are now delivering much better results than public schools."

"We need to arm our police as we need to ensure the safety of both police and the public because of a small section of society that is becoming increasingly violent."

"Thanks to the National Government the New Zealand economy is in better shape than, ...um, Greece?"

Postscript: this appeared in today's Sunday Times, "With more than one third of the Beehive support staff earning more than $100,000 it appears being a spindoctor or political advisor is a surefire way to the big bucks without being responsible for the decisions."

kaya said…
I've said for a number of years now, the one thing this government excel at is spin. Of course it isn't actually them, they pay copious amounts of money to the likes of Crosby Textor to come up with the garbage for them.
It's slowly becoming more apparent to more and more people. " You can fool some of the people some of the time etc......"
August 15, 2015 at 11:06 AM

bsprout said…
You are right, Kaya, they do excel at spin and sadly there are more experienced journalists employed as press secretaries and doing PR than honest journalism. The 4th Estate is a weakened force.
August 15, 2015 at 4:46 PM