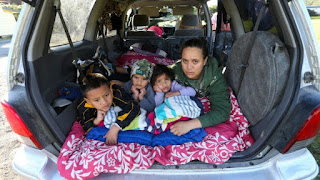 43% of wage earners got no pay increase over the past year and only 10% of salaries and wage rates in the private sector increased over the last quarter. At the same time rents have increased by 6.3%, electricity charges have increased by 3.8% and fruit and vegetable prices increased by 7%. I have difficulty understanding how Bill English can claim that there has been a growth in real wages when the reality for many low income households is an even greater shortfall between their income and living costs. It is even harder for many families to find enough money to pay the rent, feed their children healthy food and heat their homes.

The number of working families seeking support from foodbanks is continually increasing (21% increase in one Hamilton foodbank) and the number of babies and children presenting at hospitals for illnesses related to inadequate housing is also growing.

By allowing market forces to drive wage increases, the Government is not protecting our most vulnerable workers. English blames the lack of wage increases on immigration, when there is an abundance of people looking for work then the value of their labour drops (unless the Government makes a stand on the minimum wage or a living wage). New Zealand's unemployment rate is predicted to go over 6% again and our underemployment rate is also of huge concern (currently over 103,000 people are underemployed).

This Government continues to argue that the best way to lift people out of poverty is work and yet despite more people of working age being employed than ever before, poverty grows. Many young parents find themselves in more financial difficulty when in work because any increase in income is lost to transport costs and childcare.

With the downturn in dairy prices it is clear that communities that relied on supporting the dairy industry will suffer. Despite the growth of dairy in Southland, the export income generated benefited few ordinary workers and Invercargill gained a Decile 1 school for the first time after the 2013 census. The median income in the city was below the national median in 2014 (less than $28,000) and already families are feeling greater pressure and local retailers are struggling even more since the dairy slump.

Even those at the forefront of supporting those in need are being forced to work on minimum wages as the Government devolves the responsibility to underfunded NGOs and Relationships Aotearoa was forced to close its doors because it couldn't remain viable. Invercargill MP Sarah Dowie has been promoting harsher penalties for family violence while totally ignoring many of the factors that contribute to it and underfunding those who are trying to address the causes. Despite Invercargill having a large percentage of poor quality housing the Government has decided to sell off all the city's state houses. It is beginning to seem as though our struggling families are finding it difficult enough but the Government is determined to punish them further.

New Zealand should be a great place to bring up children, but for up to 50% of young families daily life is a struggle and for far too many of our children, poverty and violence is their reality. By 2017, National's neglect of vulnerable families will have spanned almost a decade and the consequences of that will have negative economic and social effects for many more decades after. We are seeing a repeat of the 90s all over again when a large percentage of New Zealand families were forced into poverty because of austerity measures that mainly affected those on the lowest incomes.

The family depicted living in their car at the top of this post had no other option while they waited for a house to become available. The offer of one night in a motel was turned down because the mother did not want to build false hopes in her children. The criteria for accessing a state house appears to be so strict currently that a family almost needs to be in a similar, degrading situation to get support.

bsprout said…
Especially if he is the one who keeps putting a tick in the negative box under my posts but doesn't front up with a comment.