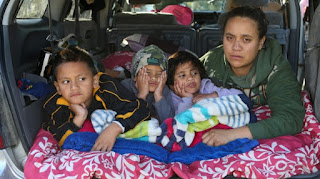 When John Key was questioned regarding New Zealand's green credentials on BBC's Hard Talk some years ago he focussed on appearances rather than the reality that New Zealand scientists were reporting:

"...you go and breath the air and you walk up a mountain, I'd argue with you that if you don't believe that it's clean and green, then show me a country that's cleaner and greener..."

New Zealand has relied heavily on the images in the Lord of the Rings and Hobbit movies and the environments that our tourists generally experience to enhance our global brand. Appearance is everything. Our reputation regarding corruption, education, health care and social justice (where we have often led the world with liberal thinking) and the provision of public services is largely positive too. The perceptions of a clean, liberal and egalitarian society continue.

We are a relatively small country in terms of population with an abundance of natural resources, both on land and in our extensive territorial waters. We should have more than enough collective wealth to share around and be the ideal country to raise a family. For New Zealanders on good incomes (and who own their own homes) this country is still a great place to live. Mike Hosking has a dominating media presence and represents the views of a growing affluent class in this country. His material wealth and life style is little different from Hollywood film stars. New Zealand is a great place to live if you're rich.

Those who have the greatest influence on policy and government spending largely live similar lives to Hosking. However, the New Zealand experienced by increasing numbers of ordinary New Zealanders is something that they are physically and emotionally detached from. Research has shown that empathy decreases as affluence grows and the disdain for the poor and low income families from this Government is growing more evident in every budget.

Visitors to New Zealand are attracted to the pretty places and the playgrounds of New Zealand's rich and most will not see or hear about the other side of the nation once known as Godzone. Most will not be aware of the decaying underbelly of our environment and society.

Our international image may still be a good one but it is largely built on our past reputation and well constructed PR. Our current Government approaches its role in a corporate way rather than seeing its purpose as serving the needs of the people. The proposed change of flag was more about branding than nationhood. Decisions around welfare are approached fiscally with the priorities of reducing costs and balancing the books rather than addressing need. The value placed on people and the environment is dependent on their impacts on balance sheets.

New Zealand Inc is promoted through greenwash and glossy PR. It has an exploited workforce and its main exports are environmentally compromising. Sustainability does not appear in any business strategy and it specializes in producing low value commodities to anyone who will buy them. New Zealand Inc should clean up its act and become an honest trader again. It should be a business that values and honours its social licence to operate.