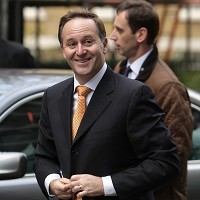 The latest Fairfax Media Poll has National being able to govern alone if the election was held now. It is an interesting phenomenon when there are so many concerns and protests around this government's initiatives and yet it continues to receive (according to the polls) widespread support.

The very same poll showed the following issues were regarded as important or very important to a large percentage of respondents (estimations based on the graph provided):
The state of hospitals and education (92%)
The state of the economy (85%)
Cost of living, including the cost of fruit and veges (84%)
Law and order and drug and alcohol culture (83%)
The rebuild of Christchurch (75%)
The state of the environment (72%)
Social welfare reforms (65%)
The sale of state owned assets (59%)
Superannuation and Kiwi Saver (54%)
Immigration and emigration (47%)
Maori issues and influence (37%)
Given the record and intentions of this National led government it does not appear to be performing well in the areas that voters regard as important. The John Key factor appears to be providing an acceptable gloss over a multitude of sins....