Environment Southland Councillor Robert Guyton's frustration with failings of our regulatory processes has led to an independent approach that follows a tradition of Southern leadership. Yet again the Government, and the nation, needs to sit up and take note.

Southland may be at the southern end of the country and be largely dismissed by much of New Zealand as inconsequential, but our impact as national innovators and leaders is actually substantial.

Southlanders are used to being sidelined or ignored by the rest of the country and rather than complain and make a fuss, we just get on with doing things independently. Southlanders are not overawed by the fact our population is small, we are a province of doers and we believe in ourselves.

In numerous sporting codes Southland punches well above our weight and with the funding assistance of our Licensing Trust we have been nationally competitive in Rugby, Netball, Cycling, Basketball, Rowing, Badminton, Swimming and many more.

Educationally we are recognized as leaders in supporting new technology and innovative approaches in teaching numeracy and literacy and our gifted and talented learners. It is not surprising that some of the strongest opposition to National Standards has also come from Southland where our professional integrity comes before any politically motivated initiative.

While there was a national move for provinces to lose their financial independence with provincial banking being absorbed by large Australian banks, Southland stood strong. The Southland Building Society remained independent and now as the SBS bank it has branches throughout the country and is arguably our largest New Zealand owned bank after Kiwi Bank.

When the Government in the sixties and seventies decided that the natural values of Lake Manapouri were expendable to hydro-electricity production Southland led the largest and most successful environmental protest that New Zealand has ever experienced.

Southland is again finding itself being pushed aside because of spurious national interests and industrial greed. The growth of the dairy industry has seen Southland's natural resources exploited with blatant disregard for the local environment and the Government's flawed faith in fossil fuels will potentially destroy the food production future of the Mataura Valley.

Venture Southland's Draft Energy Strategy is far superior to the national strategy in its environmental awareness and focus on sustainability of resources. While the National led government is pulling back from its environmental responsibilities Southland's regional councils are taking these responsibilities very seriously and are attempting to address mistakes of the past. Yet again there is little regulatory or financial support and our region will have to assert ourselves as we have done before. 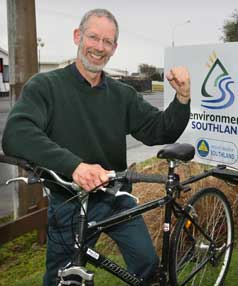