Going Solar in the South 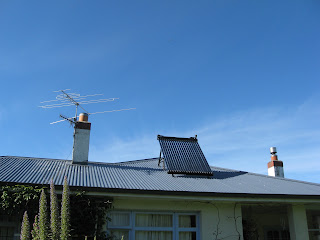 It has been quite a journey of regulation and compliance but our solar water heating system has finally been installed and is up and running. Of the hundred or so who originally indicated an interest in Venture Southland's pilot, there are only nine determined households who have stuck it through to the end and I think ours was the last to be installed.

It is too early to judge the success of the system and it probably won't be until we have a few power bills that we will really get an idea. I used the Homestar self rating system to see how successful we have been in upgrading our 1932 bungalow to make it more energy efficient. We only managed to get a rating of 2 helped by the following:

What let us down was:
It was an interesting exercise because most New Zealand homes apparently score between 2 and 4 and despite our efforts we could only get our home to the bottom end of the average range. There must be a huge number of substandard houses in Invercargill.