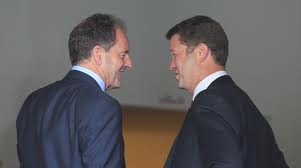 The Green Party's leadership selection process makes so much sense. Surely a party's leaders should have a proven track record within the party and have the respect of both caucus and wider membership. For Labour to quickly dump a leader then replace them through a publicly managed popularity contest is hardly the best mandate for such positions. The fact that the Greens have only had four leaders since 1995 and two of them are current is proof of the robust process we use. Surely sound decision making leads to robust outcomes and stability over time and any mainstream party should be able to demonstrate these to have any credibility for forming a government.

Leaders often grow into their roles I find it hugely concerning when Helen Clark did so poorly in early opinion polls then eventually proved her capabilities over time while Phil Goff was never given that opportunity. Whatever caused the party to go with Goff over Cunliffe originally can't have changed substantially and yet here we have a sudden replacement decision that appears to be based on dubious public perceptions.

Labour's change process has been reactionary rather than planned and rushed decisions don't tend to last well over time. Labour needs to look for stability leading into the next election and Shearer could very well prove to be the best leader over time for Labour. To throw him into publicly televised comparisons with Cuncliffe seems bizarre given that Shearer couldn't expect to perform as well as his more experienced rival. Labour should be looking at who has the most potential to put the party in the best position by 2014 and three more years in Parliament can make a world of difference. Exposing their potential leaders to public scrutiny so early on makes no sense.

The choice of a leader should be an internal process, then once elected the party needs to come in behind them with properly managed support. Russel and Metiria were both well known by the party and although both lacked leadership experience we recognized their potential and elected them with a long term vision in mind. Both have gradually grown into their roles and despite the odd human hiccup the party has stuck with them with the knowledge that, as with cheese and wine, the good ones get better over time. This was proven with Russel and Metiria's performances over the last election. Russel was widely recognized for his grasp of economics and easily became the "go to" spokesperson on capital gains taxation when Labour was still struggling to release their policy. Metiria impressed all in the "minor party" debates and her passion, humour  and measured responses made political commentators remark that the party she leads should no longer be considered minor and that she performs beyond what would be expected from a minor leader.

If mainstream media had a more altruistic approach to their role of providing informed and balanced commentary on party policy and the performance of party leadership, leading up to the election, then we may have ended up with quite a different result. Post election reviews have all praised the Greens as having the most professional campaign and recognised our leaders as having almost faultless performances. Russel's response to the billboard vandalism was politically astute and masterful, the same could not be said of Key's management of the teacup debacle or Goff's failure to quickly manage the "show me the money" taunt.

Labour will struggle to choose a credible leader using their current process and then must attempt to build a unified and effective machine to oppose a National Party that is growing in confidence and audacity.  Already the Greens are operating as the main opposition (regarding the flaws in the management of the underwriting of South Canterbury Finance) while Labour has its collective headspace somewhere else. It will be an interesting three years when Labour will need time to rebuild while the Greens will be developing even greater capability based on an already experienced and proven leadership team.