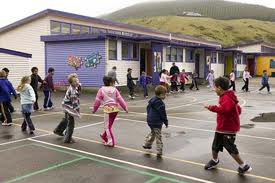 Over the last three years New Zealand has had to deal with a number of crises and disasters, some man made and others caused by forces of nature. Investment companies collapsed, a mine exploded, Christchurch shook and a ship was grounded and leaked oil into a pristine marine environment. Extreme weather has struck a number of New Zealand regions with drought, tornados and heavy rain wrecking havoc with peoples' homes and livelihoods. A number of reports have also highlighted the shocking statistics around the health and safety of our children, with at least a quarter living in poverty. To top it all we discovered that around 80% of our lowland rivers are seriously polluted and we aren't quite as pure as we thought.

While all this was happening and despite working with a fraction of the funding of other OECD countries our education system soldiered on, consistently ranking amongst the top five in the world. Our curriculum and remedial reading programmes have been widely admired and adopted and our primary teachers are regarded like gold in the UK and elsewhere. With so much needing the government's attention over the next three years at least our education system is in good heart and needs little radical change.

Surprisingly we hear from the throne, and our new Governor General, that education will again be a key focus and major changes are afoot. There is a high priority for increasing accountability of schools, strengthening teacher appraisals and reforming the Teachers' Council. On top of this Charter Schools are going to be forced onto many of our low decile communities. These are major changes that will be imposed on a sector that is generally performing well and is hardly broken.

It has also been revealed by the media that the Ministry may take over the appointing of school principals from Boards of Trustees, not only will this remove one of the key elements of self managed schools but  there would also be the potential for political influence to determine appointments. Rather than having professional leaders who are driven by serving the school community and the needs of the students in their care, schools will be led by gagged civil servants who will have to blindly follow the whims and dictates of the Ministry and the Minister without question.

One would think that forcing the flawed National Standards onto all our schools, despite widespread concern, would be enough. The $60 million spent on implementing the standards could have been better utilized in supporting struggling children and their families and now we are going to have even more money spent on major structural changes with no evidence to support a need to do so.

The proposed changes to education are not driven by a general failure of the system or from compelling evidence and research, they are purely ideological and possibly vindictive. As stated earlier there are numerous areas that are in greater need of the Government's attention than education but teachers are effective organisers and the New Zealand Educational Institute is now the 2nd largest union in the country. The fact that NZEI devotes much of its energy on professional issues and has worked constructively with the Ministry of Education and past governments on curriculum development, child welfare and teacher attestation pilots means little to this National led government. Most of the proposed changes appear to be more about reducing the influence of the teaching profession then improving education delivery to children and judging by the success of similar changes internationally many children will probably suffer as a consequence.

Our education system is a great one and it could become an excellent one, but not through what is being proposed and not by refusing to collaborate with the profession.

XChequer said…
I originally posted this on another post that you had done on 19 December, bsprout entitled "School Principal Appointments Becoming Political?" Part of Vigos comment was:

".......focused on results at the expense of quality teaching and learning environments."

but my reply to this comment seemed a better fit for this thread.

How bout this equation for a game-changer, Vigo:

If we make Quality Teaching = a, Quality Learning Environments = b and Results (R) we could get

One would of thought that the equation above better represents the situation instead of the sum parts being exclusive?

Having had some considerable experience of our education system, it always astounded me the number of crap teachers there were. Crap in that other teachers acknowledged that they were bad, crap in that their classes were always the worst behaved and crap in that the children in their care and responsibility always came out with very poor results. And the fact that other teachers felt that they could not speak up to the reality that they felt the dismal efforts of some of their colleagues were a serious impairment to kids development speaks volumes!

What I'm trying to get at here is "accountability" in that their really is none in the current system. As anyone knows who has been involved in the system, it's incredibly hard to get fired once someone has got a place at a school. Mediocrity is accepted in a system that allows and enables below-average performers to produce below-average students.

Am I saying that the NACT way is the best? Not entirely. Do I think that National Standards are good? As a parent, yes! Are Charter schools the ultimate answer? Don't think so.

bsprout said…
I appreciate your interest in my blog, XChecker, and I agree with your view that quality teaching and learning environments are paramount. As for ensuring a high standard of teaching, I think there are many factors involved. As someone who has taught for over thirty years I would have to say the hours worked and commitment needed from teachers currently is greater than it was when I started. I think teachers are more professional and expectations are greater, there will always be "crap" teachers but this is relative. Early in my career I had colleagues who would be dismissed immediately if they were practicing today. The concern I have is around who we accept into the profession, teaching does not have the status it once had and the academic expectations of those coming in has possibly become lower. If you get the best people into the profession you are most of the way there.
January 9, 2012 at 4:47 PM

XChequer said…
" If you get the best people into the profession you are most of the way there."

Excellent, Monsieur Sprout. I expect to see you advocating for both National Standards and Performance pay, tout suit.

XChequer said…
After all, you gotta admit that paying people well is a great way of pulling top talent.
January 9, 2012 at 5:51 PM

bsprout said…
Hmmm Mr Chequer, you need to read some of my earlier posts, National Standards will do nothing to increase teacher performance and will more likely encourage teacher dishonesty. As for performance pay, it all depends how that is managed and most such systems have failed elsewhere. The Finish system of choosing, educating and monitoring teachers appears to be the most successful, especially as they are the best performing country educationally, and performance pay does not exist there.
January 9, 2012 at 10:53 PM