Renewable Energy, What Others Are Doing. 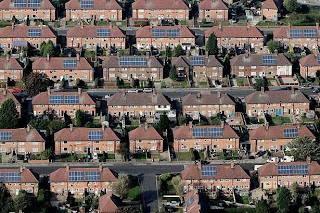 I had a conversation with a young Chinese woman who is working in New Zealand. We talked about the differences between New Zealand and her home country and I was particularly interested in how her Government is approaching their energy crisis. China has experienced rapid economic growth that has been largely powered by coal driven power stations, while this has provided the energy needed to support development it has had severe environmental impacts. The Chinese Government has recognised the need to move to more environmental means of electricity production and is now leading the world in its manufacture of solar panels and other forms of renewable generation.

At a domestic level China has encouraged households to become self-sufficient in energy and the price of solar panels has become increasingly affordable. According to my traveling companion more and more households generate most of their own energy and are encouraged to feed any excess into the national grid. This seems to be a hugely successful initiative that not only reduces living costs for householders but may actually generate enough electricity to support the closure of some coal fired stations.

A similar scheme exists in the UK and, despite a recent cut in subsidies, to go solar is still an attractive proposition. The cost of the panels has dropped to the extent that the lowered subsidy has had little effect on the costs of installation and the quality and efficiency of the panels are improving. While traveling from London to Hull I observed the number of houses sporting solar panels had dramatically increased since I was here over two years ago.

I struggle to understand why a country as energy rich as New Zealand, and one that produces most of its energy needs through renewable sources, should actually  contemplate generating energy from coal (the Huntly Power Station even imports coal from Indonesia). While China and the UK have little choice but use polluting forms of power generation until they can convert to cleaner sources, they are obviously making a concerted effort to change.

New Zealand, on the other hand, has a flawed system that traps consumers into an increasingly costly system of supply. Consumer charges are based on the most expensive costs of production and there is little encouragement for households to become independent or potentially earn income from supplying to the National grid. We have an advantage in energy production that many countries would dream of having and have done little to exploit it. If managed properly our energy supply systems could provide huge economic advantages to both households and business, but instead it is used to generate government revenue to make up for short falls elsewhere.

Unknown said…
local law 84 was one of those laws that helped companies to measure the wasted energy and control it. What could be better than saving money and being Eco friendly at the same time.