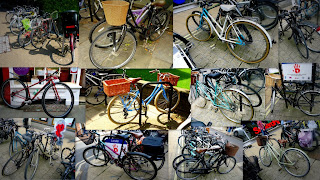 New Zealand has developed an aggressive car culture that becomes more obvious when one travels overseas. In New Zealand the majority of car drivers appear to believe that roads belong to them and woe betide any pedestrian who attempts to use a pedestrian crossing or cyclist who wishes to use the road as well.

On average 36 pedestrians are killed and around 1000 injured on New Zealand roads every year and many are killed or injured while legally using marked crossings. Every year around 10 cyclists will die through collisions with motor vehicles and about 300 will be hospitalised. Obviously for both pedestrians and cyclists there will be many more accidents that went unreported. Anti-cyclist views are common, and despite attempts to lay the blame on some cyclists' behaviour, only 23% of accidents involving bicycles and motorcars are the fault of the cyclist.

It is always a pleasant surprise when I spend time in England and experience a totally different attitude to road use. One would think that with a greater population, narrower roads and more congestion that impatience and intolerance would be more apparent, but it is not. I only have to approach a pedestrian crossing for cars to slow in anticipation that I may cross and cyclists are followed patiently along narrow roads until a safe opportunity to pass. After five days here I have yet to witness any sign of frustration from a motorist due to having to accommodate cyclists or pedestrians.

Yesterday I visited York and enjoyed walking around the ancient town where the centre was largely devoid of cars. Cars are actively discouraged in the central area and visitors to the city use the numerous 'park and ride' facilities. Car parking is free on the outskirts of the city and buses leave for the centre every ten minutes. The cost of the bus is a fraction of the cost of parking in most New Zealand cities.

Bicycle stands were everywhere in York and the majority of the bikes I saw were designed as transport rather than sport. Fold up bikes and baskets are common.

When recently reading a book on the history of Invercargill I discovered that even in the 1950's most people still chose to cycle to work and it was cyclists that had lobbied the City Council to get all the city roads sealed. New Zealand roads were never intended to be for cars alone.