The Importance of a Strong Third Party. 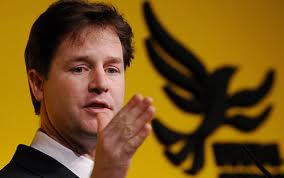 The Liberal Democrats have held their annual conference during my stay in the UK and it has been interesting to see how Nick Clegg has managed to put a good case forward for his party's continued existence. He claimed in his closing speech that the Lib Dems exist to put an end to the two party system. Clegg then proceeded to list the policies and legislation that the Conservatives had attempted to progress that they had blocked:

Smaller parties in any coalition tend to suffer from criticism that they are ineffective and lose support. Their own members are frustrated when important party policy cannot be progressed and they are blamed for not stopping the passing of unpopular legislation. From an outsider's perspective I feel that the Lib Dems have probably been quite effective at knocking the rough edges of a Conservative Government that could have caused more damage than it has.

What is also remarkable is what the Lib Dems have managed to achieve with relatively few MPs. Britain still operates under a first past the post system, so that although the Lib Dems won 23% of the votes, it only provided them with 9% of the seats. Despite this Nick Clegg was made Deputy Prime Minister and they got 5 cabinet Ministers.

One cannot make direct comparisons between the British and New Zealand political systems, because they are quite different, but Clegg's justification for a strong third party is still relevant for us.

To all intents and purposes our National led Government has operated no differently from one under the old first past the post system. It has used and abused it's coalition partners to the extent that there has been little of their ideological agenda that they have not been able to achieve. They have paid off the Maori Party with political trinkets and baubles and John Banks and Peter Dunn were provided with large rubber stamps. We effectively have a party that won 47% of the vote imposing their ideology on 53% of the voting public who didn't support them.

A useful situation for New Zealand would be one that has a similar levels of support for our three largest parties as in Britian, but under MMP. If the Greens were to achieve over 20% of the vote as the third largest party it would mean that any future coalition Government would need a high level of collaboration and compromise. This would lead to legislation that is progressed with less haste and a higher level of scrutiny. It is also likely that more voters will be represented in the decision making process.

In the UK the Lib Dems see themselves as the party that would be comfortable working with either Labour or the Conservatives but I don't see the New Zealand Green Party fulfilling the same role. Given National's philosophical positions regarding human rights and the environment, and our Labour Party's neoliberal past, I see Labour as New Zealand's future 'middle' party.

It will be up to New Zealand voters to decide if they want to support a two party system under MMP or fully embrace the idea of true representational governance that can be provided with a strong third party.