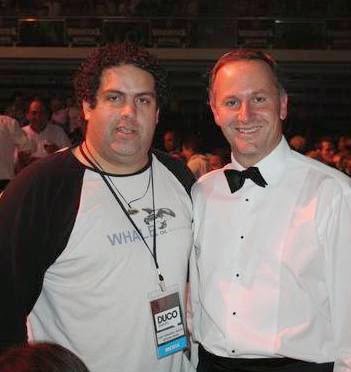 I was in Wellington last weekend, alternating between spending time with my two student children and attending our Green Party executive meeting. Being with intellectually engaged and compassionate people was a useful foil to the depressing events that hit me over the past few days.

The first event was a discovery that I made by chance during a debate with some rightwing climate change deniers. In response to their claims that the 97% of scientists who are in agreement about the human influence of climate change are just part of a huge conspiracy for their own personal gain, I looked at the potential influence of oil and gas companies. I discovered that in a list of companies with the largest revenue in the world, oil and gas fill 6 of the top 10 places (17 oil and gas companies in the top 40). There are also five automative companies in the top 40 and each of these companies earn hundreds of billions every year. The smallest of these companies has an income about 50% greater than the New Zealand Government. No wonder most Governments struggle to cut carbon emissions and those few questioning the science have strong financial backing.

Considering the immensity of the climate change issue, and the urgency with which we need to act, unless we can counter the considerable power of the oil and gas industry little will be achieved. Our Government has opened its arms to the oil and gas industry and has given up much of our land and territorial seas to exploration, short term gain is more important than the health of the planet. There will be no attempt to restrict the recovery of fossil fuels under a John Key led Government.

The next event was catching a late showing on TV of Inside Job, the award winning 2010 documentary narrated by Matt Damon that described the systemic corruption of the United States by the financial services industry that led to the Great Recession. The blatant greed and callous disinterest in the suffering caused to ordinary people by those leading the investment companies and banks was horrific. Of course most were bailed out and those behind the corruption and inevitable collapse of the financial sector are still in leadership roles and many have been employed by successive US Presidents, including Obama.

What struck me again when watching Inside Job was that our own Prime Minister came from that culture (Merrill Lynch) and while he wasn't working for them during the crucial years before the recession, he was still involved in an industry driven by short term thinking and instant profits. Compassion has no part in this industry where only the fittest survive and those surplus to requirements are disposed of quickly. Key thrived in this environment and his reputation for a having relaxed manner despite a ruthless approach to his work caused him to be labeled the 'Smiling Assassin'. Key's calculating, almost mercenary approach to his leadership has a history and he has brought these skills to his role of Prime Minister.

Key has generally managed to distance himself publicly from much of the grubby activities that have been going on within his Government but it is obvious that his modus operandi from his Merrill Lynch days is still in operation. It is also clear that the command centre for National's dirty tactics is the PM's own office and, despite his denials, Key is probably orchestrating a good deal of it himself.

Since the September election opposition parties have had to cut staff numbers because the Government of the day sets the budget for their resourcing and there has been no funding increase since 2007. Over the same period the vote within the budget for the Prime Minister's Office and cabinet has increased over 100%.

Twice as much is being spent on supporting this Government's intelligence and spying capacity than policy development and governance of the various departments and ministries that provide support and services for New Zealanders. John Key is not motivated by improving the lives of less fortunate, but he does appear to enjoy the adrenalin rush of attack politics and scoring points over the opposition. His braying and gloating performances in Parliament, as he ends many of his answers with personal attacks, is something he actually appears to enjoy. It is also clear that his personality is more suited to the dirty politics culture of attack bloggers than the dignity and diplomacy expected of a Prime Minister. Those who Key corresponds with personally via txts are not New Zealand's wise heads like historian Dame Anne Salmond or award winning scientist, Dr Mike Joy, but Cameron Slater.

In John Key we have a Prime Minister who is spending more time and money on controlling the opposition to his ethically challenged Government than on developing good policy for the benefit all New Zealanders. For him, being remembered for changing the design of our flag means more than saving our environment and lifting 25% of our children out of poverty. Attack bloggers and corporate lobbyists always have his ear and the plight of those struggling to find a home while working on unlivable wages do not. We have a Prime Minister who is driven by maintaining power and control, by any means, rather than service and compassion.