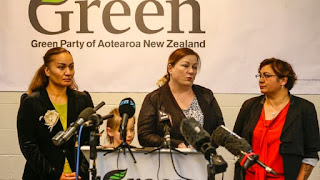 It is likely that New Zealand hasn't experienced this level of homelessness and lack of decent housing since the depression. Even in 1905 the importance of state housing was recognised by Richard Seddon and his Liberal Government:

Up until 1991 the state housing stock grew to generally meet demand and totaled around 70,000 at peak. If we had continued on the same trajectory of state house building as we had from 1950 to 1990, we would have over 90,000 state houses now and a constant, ongoing, supply. Market rentals were brought in the 90s, around 8,000 state houses were sold off and underfunding has been the reality since. Well built state housing had created the supply of low cost housing for future generations and the state houses of the 40s are still seen as solid options for private owners compared to the leaky buildings of the deregulated 90s. The majority of new houses are being built for the affluent and we are consequently ranked third in world for the size of our homes.

Given that it is now common for multiple families to squeeze into a one three bedroom house and how many are forced to pay up to $400 a week to live in a garage, it does seem as though we have a back to the future scenario.

This Government has known since 2008 what the previous Labour Government had begun to address, New Zealand was falling behind in meeting the growing demand for social housing. Report after report has crossed the desks of National Ministers detailing the needs and describing system failures and have been deliberately ignored. The numbers of those on Housing NZ urgent waiting lists continued to grow despite tightening the criteria and it can now take up to two years to address an urgent housing need.

This populist Government understands that to remain in power it must retain the support of middle New Zealand. It has deliberately sought to spin the realities of welfare failures so that greater levels of tolerance for poverty can be achieved and less spending is necessary. The Government has been hugely successful as they have managed to restrict the funding and drastically reduce the capacity of the country's main provider of social housing.

Middle New Zealand did not have first hand experience of the deliberate underfunding of state house maintenance (now estimated at $1.5 billion). The demand that the Housing NZ pay a $118 million dividend was generally accepted and the explanation that the dividend was necessary to "place a discipline" on the crown entity went without a protest from middle New Zealand.

Those protesting at the removal of state houses from prime real estate in Glen Innes were largely condemned by middle New Zealand and yet the 156 state rentals were going to be replaced by only 78. The plan to sell all the 1,500 state housing in Tauranga and Invercargill has not met large protests as middle New Zealand felt comfortable with the plans and those who were directly impacted were too frightened to say anything (trouble makers are likely to find themselves homeless).

There was some feeling of discomfort when it was revealed that the poor condition of a state house was implicated in the death of a young child, but it was presented as a maintenance issue rather than the tip of an iceberg. The 50,000 children who are being hospitalised annually because of poor quality housing mainly passed under the radar as these are not the children of middle New Zealand. I have heard it said that the problems are more likely to be caused by poor house management than a problem with the house itself as much of middle New Zealand has experienced living in uninsulated homes and survived. They forget that heating was cheaper, overcrowding wasn't an issue and many mothers stayed at home and kept the house warm during the day. Blaming the poor for their situation is encouraged amongst middle New Zealand.

The Green Party's announcement of a new policy to address the housing crisis included the plight of a mother who did not fit the generic picture of someone needing social housing. This mother was white and was obviously educated and articulate. She had been married and employed but a marriage failure and having to leave work to care for her seriously ill daughter had reduced her income and she found herself homeless. She needed to remain in Auckland to be close to the Starship Hospital but couldn't find anywhere to live. She could no longer adequately care for her sick child and nothing would be available for almost two years. Her only current option is her car.

Parking and sleeping new zealand said…
wrong , the 1950s housing crisis was worse , people in Auckland living in tents in Albert Park , Victoria Park ,Western Springs Transit camp . People qued at the incinerator where victoria park is now to get free showers provided by the council incinerator where Victoria Park Market is now . People had no where to live at all .Then someone came up with a bright idea that worked .
May 21, 2016 at 9:53 PM

bsprout said…
I didn't know about this CNZA, do you have a link that can provide more information? Obviously the solution was just to build more houses and I bet the relative costs to build them then was much less too. It costs 30% more to build a house here compared to Australia and yet we have an abundance of natural materials.

A number of people have suggested quality prefabricated houses where the main construction can be be monitored more easily and automated building will be more cost effective. I think they do this well in Scandinavia:
http://swedishhouses.com/key-facts-timber-framed-homes
May 21, 2016 at 10:34 PM

saveNZ said…
Commentators need to stop blaming middle NZ. How the hell are they responsible for this mess? It is government policy from neoliberalism and selling off state houses to free trade agreements to record immigration numbers and a cheerleading free market media - all thrown together to wreck havoc on our former social democracy. If people want change, then rather than blaming middle NZ (the easy thing to do) you need to encourage people to vote next election, kick up more of a fuss when National continue to wreak havoc on our country (where do you start?) and those in opposition need to look at the bigger picture and what the majority of people living in this country want - i.e. middle NZ! And they don't want neoliberalism, they don't want TPPA, they don't want record immigration when there are no jobs, houses or public transport in place, and if the opposition do want these things and are trying to force them through or justify them in National Lite way, then they are out of step with middle NZ.
May 22, 2016 at 10:12 AM

bsprout said…
SaveNZ, bad things happen when good people do nothing. I have been the organiser of a number of marches and protests in Invercargill against the TPPA, the mining in our conservation estate, against the selling our state assets and the sale of Invercargill's state houses. Each time it was very difficult to get ordinary people to care and to think beyond the spin they get via our Government.

National has got a very slick PR machine and its Crosby Textor influenced approach is very effective, no matter how dishonest and hopeless they are they can ride through a crisis with glib putdowns and childish reactions that Trump has found useful. Nothing will happen regarding a change of government until middle new Zealand decides enough is enough. Obviously the opposition has a role in that but the strength of any opposition is also dependent on strong people joining them to make them more effective.

I also acknowledge that it is hard to stand up to this Government. Many I know have been attacked by the likes of Slater and others (including myself) and had their character questioned and dragged through the mud because they care about education or healthy food or want stricter controls on alcohol. Nicky Hager had his home raided, his equipment taken and even his daughter was targeted. It is so much easier to just concentrate on living day to day, pay off the mortgage and be thankful that one has a house.

Eric Elley said…
Yeah, well said. But I think the constant references to "Middle NZ" imply political awareness and will is lacking, & needs to be better informed of the underlying issues. Not so much that they are to blame. Loosing our equality, social fairness, & capacity to care for those less fortunate- a crying shame. Nothing less. Should not sustained.
May 23, 2016 at 8:24 AM

bsprout said…
Eric, the blame game tends to become counter-productive when trying to achieve change, I agree that greater political awareness is needed and a higher level of compassion. There has been some excellent documentaries on poverty, education etc made recently by Bryan Bruce and Nigel Latta but they are rarely screened at prime times. When we have more segregated communities it is more difficult for middle NZ to appreciate what is really happening.
May 23, 2016 at 9:25 AM