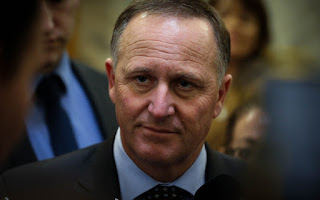 Even though the Green Party itself jokes about its constant calls for inquiries there is a good deal of truth to the last sentence of a 2012 satirical post: "Every time the Green Party cries wolf it turns out there is one."

Our Prime Minister has been desperately spinning the results of John Shewan's report into New Zealand's foreign trust regime. Even though there was some concern from the opposition that Shewan's insider status would mean a weak review, it hasn't panned out that way. The report is actually very damning of the weaknesses of the current regime and recommends that changes are needed around disclosure. While Shewan wasn't prepared to say that New Zealand was operating as a tax haven, we clearly didn't have robust systems in place to detect illegal activities. While we may not fit the OECD criteria for a tax haven we were obviously being used as one and had been advertised as such by trust managers.

If it wasn't for the Panama Papers New Zealand's foreign trust laws would probably not have undergone this scrutiny and most New Zealanders would have been unaware of our tax haven reputation. Before the dodgy regime was exposed to sunlight the Government was more than happy to support it and Key himself promoted the $24 million in income that was generated for the few involved in the industry. He clearly had full knowledge of what was really happening as his own personal lawyer lobbied to protect the industry and was up to his eyeballs in operating dodgy trusts.

The Government was forced into the review and even when appointing someone considered 'trust friendly' it still exposed the soft approach it has had to regulating potentially damaging and illegal economic activity.

The Government actively discourages any scrutiny of its governance and despite talking about greater transparency and openness, does everything it can to achieve the opposite. After joining the Open Government Partnership our Government has ensured it does the least possible to honour its obligations and it has recently sacked the Stakeholder Advisory Group to reduce activity and stakeholder involvement even further. This Government is very good at signing up to declarations for human rights and greater transparency and then doing the opposite. The UN's reports on New Zealand's human rights record identify more breaches and concerns each time (64 recommendations in 2009 to 155 in 2014).

The Official Information Act (OAI) was supposed to allow New Zealanders and the Opposition to have access to any information in the public interest and yet the Prime Minister was very open about the fact that information is often withheld if it was in the Government's political interests. Documents that are eventually released do not always provide the information sought because of strategic redactions (blacked out sections).

One of the most important institutions for providing authoritative scrutiny of the Government's operations is the Office of the Ombudsman. This office has had an increased work load, especially around IOA complaints. In 2013 there had been an increase in complaints of almost 30% on the previous year (13,684 complaints) but inadequate funding to do the work in a timely fashion. Even though the Government has increased funding a little there is still huge backlog and the Chief Ombudsman has requested $2.6 million to clear the 650 cases that are one to six years old.

The damning report on the highly flawed MFAT inquiry conducted by Paula Rebstock exposed how the Government deals with public servants who question their decisions. Ron Paterson, the Ombudsman who wrote the report into the inquiry, resigned after its release.

It is also interesting to note that the respected author of Parliamentary Practice in New Zealand, David McGee, also served as an Ombudsman. Just before retirement (and despite a heavy workload) he conducted his own investigation into the appalling process used to close Christchurch schools after the earthquake, such was his personal concern about reported abuses of power and poor process.

The pressure on our Ombudsmen is obviously intense and the reception to reports that negatively impact on the Government are not well received. The previous Chief Ombudsman Beverley Wakem was easily exposed in a Lisa Owen interview as being in a compromising position when trying to defend her review of the OIA. Owen quickly found evidence that showed the review was a white wash and Wakem's reluctance to criticise the PMs blatant disregard of the law was telling. It would be very interesting to know which cases have been ignored for 6 years and what influence the Government does have on the office behind the scenes.

Good governance should be based on evidence and those most affected by decisions should be properly consulted, yet neither of these are priorities for this Government. Those charged with carrying out its ideologically driven agenda are paid handsomely and those who are employed in watchdog roles are under-resourced and actively discouraged.

We owe a lot to those who risk their careers and reputation by telling the truth and exposing corruption. It shouldn't be so hard for our public watchdogs to do their work and it shouldn't be at such a high personal cost. The bad treatment of official whistleblowers isn't new (as anyone who remembers what happened to Justice Mahon will know), but it shouldn't still be happening.

Perhaps we need another inquiry?