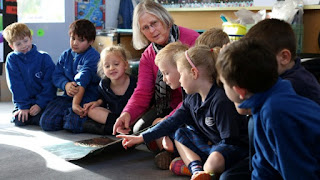 The Global Education Reform Movement (Germ) has spread its Neo-liberal tentacles into public education systems around the world. New Zealand's public education system has not been damaged as badly as many and this is largely because we began as a world leader and it takes some time to breakdown a professional culture that took more than sixty years to build.

The New Zealand public education system was continually assessed as one of the top four in the world for many decades, largely because of Clarence Beeby's 1940s shift to a child centred approach to teaching. Beeby believed that an education system shouldn't be driven by assessment but by lifting the quality of teaching through high quality professional development. Investing in the professional support of teachers through a well funded advisory service was considered the best way to improve teacher practice and achieve the best outcomes for children. Using evidence to inform professional development was also extremely important.

The things that made our education system a world leader have been cut and eroded over the last seven years and an earlier post (over 55,000 views) lists the multitude of damaging decisions and policy shifts the sector has experienced under the current Government. Ideology rather than evidence continues to drive change.

Despite the clear failure of the Charter Schools, Hekia Parata is allowing more to become established at great expense. The cost per pupil in Charter Schools is well beyond the expenditure of the public system and yet they are continuing amidst ongoing evidence that their performance is substandard while the operational funding for public schools has been frozen.

Some of the biggest spends in education are actually related to capital works or addressing delayed maintenance, fixing leaky schools and building new schools to accommodate an increasing population. While the Government claims the budget for education is increasing, schools are seeing little difference in their operational funding.

This Government is determined to continue with the National Standard assessment system that is not designed to identify the holistic needs of children and we are witnessing a decline in our global rankings for achievement. It continues to invest more in private schools while under funding special needs support and lower decile schools. It has only paid lip service to targeting funding to 'priority learners' and the reality for most schools is that there is little money available for those most deserving of extra support. Many schools are now more concerned about the basic health needs of their pupils and increasing transience caused by expensive housing and insecure employment than National Standards assessments in literacy and numeracy. The internationally regarded Dunedin Study has shown that if a child experiences poverty and deprivation in their early years, permanent damage will occur to their physical and mental heath as adults.

Bulk funding of schools was tried and rejected in the 1990s because of the pressure on schools to balance general operation costs with teacher pay and it is still an issue with support staff whose pay comes out of operational funding. Bulk funding also creates winner and loser schools based on a financial lottery rather than student outcomes. When there is a pay increase, but no extra funding, then a school has to cut hours or expenditure elsewhere to accommodate it. Bulk funding favoured the employment of inexperienced (but cheaper) teachers, larger class sizes and the downgrading of professionalism as a driver for recruitment and retention.

A new system of funding teacher salaries is being proposed that will operate in a similar way to bulk funding. While teacher salaries will still be paid through a central system, schools will be given a set amount to cover salaries.  Any underspend will be credited back the the school and an overspend will have to be recovered. This will clearly be a one size fits all approach where schools that are staffed by a larger number of more experienced teachers will struggle to keep within their budget and schools with a larger number of unqualified or inexperienced staff will be rewarded. Staffing decisions should be based on professional suitability and having schools staffed largely with highly qualified and experienced teachers as a common goal.

I once taught with a wonderful experienced teacher in the UK many years ago, she was highly effective and loved by her students.  Her passion was classroom teaching and she didn't want to lose that by taking on a leadership role. However when she attempted to apply for jobs in other schools she found that she had become unemployable. Her qualifications and years of experience put her on the top salary level and within a bulk funded system she had become too expensive for most schools to consider. I can't imagine a hospital not employing a heart surgeon because he/she is too well qualified and experienced. This is a dangerous path to take and will likely see us dropping even further in international rankings.

Allan Alach said…
Well summarised. I'd suggest that the rot started in 1990 with the introduction of the so-called Tomorrow's Schools. As has been shown (by John O'Neill for example) the whole Tomorrow's Schools set up was ideologically driven by the neolibs in the treasury, with the eager support of the neolibs in the Lange led Labour govt, many of who became the first ACT MPs and thus are fellow travellers with David Seymour. Mind you Phil Goff was a pretty ghastly minister of education.

Kelvin Smythe predicted the path that would be travelled way back then and he's been proven correct. While there have been so positive moments (under Steve Maharey & the NZC) by and large the trend has been relentless. I fear the damage is close to being irreparable.
June 23, 2016 at 5:52 PM

bsprout said…
I agree, Allan, that it will take a long time to repair the damage. The Education Ministry will need to be restaffed with those who actually understand education and the whole system will need to be rebuilt.
June 23, 2016 at 6:09 PM