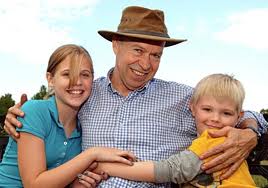 Dr James Hansen addressed around 300 hundred people in Gore; regional councillors, council staff, NIWA scientists, farmers, high school students, environmentalists and interested members of the public. It was an especially impressive crowd when you consider the presentation was in the afternoon, during working hours, and many had to take time off work to attend. One Invercargill secondary school teacher had juggled class commitments to be there and wished she could have taken some senior students with her.

For some, James Hansen personified good science and what he had to say represented the accumulated knowledge from the world's scientific community from one of the most respected members of that community. For others (the skeptics, deniers or doubters) they wanted to hear for themselves what Dr Hansen had to say and see if he could pass their own personal criteria for assessing the of the value of his words.

Although the science was greatly in evidence in Dr Hansen's hour long initial presentation, the motivation for his books and his public advocacy for the health of our planet was an emotional one. His grandchildren featured heavily in the opening of his talk, his obvious pride and love for them was openly expressed and his determination to leave them a decent future on this planet was clear. The sincerity of the man could not be faked, he was not an industry lackey or a slick salesman of corporate spin, he was an honest and humble scientist who loved his family.

Dr Hansen's message was essentially a simple one, supported by numerous tables, graphs, extensively researched data and measured explanations of what they represented. He described how a variety of natural "forcings" have influenced our planet's climate since the beginning, but these have been superseded by man made forcings that threaten to take us on a climate changing journey well beyond the natural course of things. Unchecked we stand to loose much currently inhabited land to rising sea levels and will experience severe climate fluctuations . The ongoing survival of many species, whether animal or vegetable, will be compromised and many will be lost forever. By far the most dangerous forcing that is known to science is carbon dioxide which accumulates in the atmosphere over time and fossil fuels are the main contributor.

Dr Hansen did communicate hope but claimed that we must turn to our governments to do the decent thing and provide legislation and regulation that will shift dependency from fossil fuels to more sustainable energy forms. Using methods such as a direct carbon tax (that would provide a more realistic recognition of external costs) would force the commercial world to change their practice to accommodate it. What was once cheap fuel would become expensive and more sustainable alternatives would suddenly become attractive. Market forces work but it is up to our governments to shape them in our best interests.

The questions that followed were informed, relevant and testing and Jeanette Fitzsimons remarked on how impressed she was with the standard of them. Dr Hansen strengthened his credibility with his honest answers and when some questions were beyond the scope of his research he openly admitted he did not have the personal understanding to give an informed answer. Deniers, who provided their own understandings of climate change by questioning the importance of CO2 and suggesting gases such as water vapour were more important, were answered respectfully (by not totally dismissing the concepts) and putting them into perspective.

On the lignite issue that confronted us, Hansen was very clear, it needed an informed public debate (not closed forums) and strong leadership from our government. Mining the lignite would be highly detrimental to the health of our planet and although our emissions may appear comparatively small in an international sense they are still enough to tip the balance. To roll over and let it happen should not be an option if we really cared about our future generations. I was convinced.

robertguyton said…
Where were those Gore District councillors Dave? It's their patch, their issue. The must have been cowering timorously under the table in their debating chamber, hoping no one would notice. I'd prompted my fellow councillors to attend - our chair was filming for CampbellLive at Waituna and three others were sitting at the hearing for Ulva Island. Two of us attended, plus our CE. Not good enough though, imho.
May 20, 2011 at 9:18 AM

Pat Scott said…
I really appreciate the way you write Dave, you have captured the "flavour" of James Hansen completely. Do you think you could write an article for the ODT about James Hansen's approach to the lignite issue, or whatever you like about the lignite issue. Coming from Southland I am sure they would publish it, about 500 words.
May 20, 2011 at 11:48 AM

bsprout said…
Thanks Pat, I wrote this late last night and on reading it again today have edited it further. I will look at sending something to the ODT.
May 20, 2011 at 1:12 PM

Port Chalmers said…
Agree with Pat re op piece for ODT - would be good to have something in the Southland Times too. I also went down from Dunedin (am an ex-Southlander) and found the level of interest and understanding very impressive. What was most heartening (and upsetting too) was that people are upset about being locked out of the legislative approach Hansen advocates as there has been no opportunities for submissions, and the legislation says climate change issues cannot be raised in RMA submissions. The young woman from Nightcaps was particularly moving on this.
May 20, 2011 at 7:53 PM