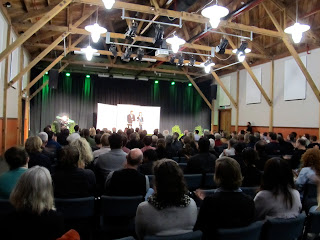 The Green Party's 2012 AGM has just finished and I thought I would share some of the highlights from my personal perspective:

I gave the Values Party my first vote and their 1975 manifesto remains a pivotal document in the history of the New Zealand green movement and an influence on the Global Greens Charter. This year is the fortieth year since the New Zealand Values Party became the first "green" party in the world to contest a national election (1972) and a day of celebration and reflection had been organised on the Friday before the Green Party AGM.

The passage of time since the seventies became obvious when the past members arrived with greying hair, walking sticks, hearing aids and even a wheelchair. The average age of those who stood in the 1972 election was 29 years, they were youthful, enthusiastic and idealistic. However, on listening to them on Friday one had to admit that although they had lost their youth over the preceding years, their enthusiasm and idealism remained.

Through following the afternoon discussions I was able to fully appreciate the strong connections between Values and the Greens. Green policy largely grew from the Values' manifesto and some of the early leaders of the Greens (Jeanette Fitzsimons, Rod Donald and Mike Ward) had been active members. The Values Party had introduced new and pioneering political thinking to New Zealand, based around social renewal and a respect for the environment. It was foremost a party of ideas, especially when it was unlikely to become a parliamentary force while operating within a First Past the Post system. The Greens, on the other hand, were formed in an environment where Values' ideas had greater public acceptance and, under MMP, a parliamentary presence was possible. The Green's have been able to transform those ideas into a political reality and put some organisation and pragmatism into the process.

Claire Browning's book "Beyond today: a Values Story" was launched the same afternoon and in her words, "This book - a values story - is the Green Party’s story. It celebrates Values, and says that the Greens should too. Not just any values: all politics is about values, of one sort or another. By values, I mean: ‘Green Values’." It is a book that needs to be read by all those who wish to understand where the Green Party came from, its reason for being and why the Green journey needs to continue.

Behind the lectern two kites had been hung with intertwining tails: 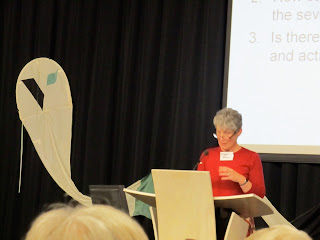 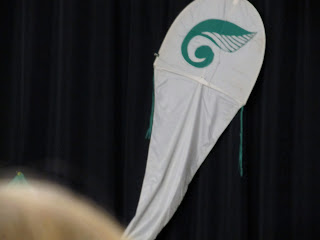 We were joined this year by members of the recently formed Pacifika Greens. It was really wonderful to have a Green AGM that better reflects the diversity of New Zealand Society.

Roland Sapsford, our "great green giant", has skillfully facilitated and mediated through many internal crises and external challenges over his six years in the role. Few people in the Party have his depth of institutional knowledge and it is great that we have a handover strategy to ensure that Pete Huggins is fully supported as his replacement. Roland's speech accurately described how far we have come as a Party and how our growing membership and organisational capacity will position us well in supporting a Green Government.

Caroline Glass could make a living out of standup comedy, her speech was one of the most entertaining I have heard, and she has proven to be a highly intelligent and astute convenor of our policy committee. I do hope she continues to be involved in policy development because her skills will be invaluable as we continue to streamline and rationalise our policy writing process.

I helped facilitate a workshop titled "What is fit to govern?". We looked at the characteristics and attributes, structure, cabinet and the processes we would like to see under a Green Government. All the discussions and ideas revolved around improving transparency, increasing participation in decision making and someone even had the radical idea that all legislation should have an evidence or research base and recognize basic human rights (it would be a radical approach currently).

I attended a workshop led by the courageous Liala Harre, who is our Party's new Issues Director and leading the Green's campaign (CIR) against the Governments asset sales. When questioned about the criticisms from right-wing blogs regarding the Greens use of parliamentary funds to support the campaign, she was able to provide a very good answer; The Government is spending $120 million to progress the sales of our SOEs and promote the sales to the public, so it is more than reasonable for an opposition party to spend only thousands in opposing it.

The Greens employed BERL, respected economic researchers, to look at the long term viability of selling the assets and their report revealed it would have a hugely detrimental affect on our economic sustainability.

It was impressive to hear how the general public concern had enable the the Greens to attract thousands of volunteers to help with the petition, no wonder the right are agitated!

Metiria's speech focused on women and children (the heart of politics), our appalling levels of poverty and the Government's total failure to address it. She expressed the need to have a cross party agreement on addressing the needs of  children and our growing inequities of income. This approach had been used in the past to address the financial needs of our elderly and who now have amongst the lowest levels of poverty in the OECD, however it is not the same for our children, where we are ranked near the bottom. Urgent action is needed if all children are to enjoy the basic pleasures of "a full belly and a nice shiny, new pair of shoes".

Russel's speech recognized the environmental and social history of our country and described the natural wealth that we have squandered and the abundance that remains but is under threat. He described how there has always been those who call Aotearoa home and want to protect it and those who would rather see it as a source of a quick buck. He recalled Michael Savage as someone who understood how a collective effort can raise a country from economic depression:


"Savage's government understood that we are in this together, and that together we can solve the biggest challenges of our times.
This sense of collective purpose, however, has been undermined by a series of misguided governments. The reforms of the 1980s and 1990s not only resulted in large parts of our economy being sold offshore — they damaged our sense of collective nationhood.
Within a generation, New Zealand has moved from being one of the most equal societies in the western world to being one of the most unequal."
He called on all those who understand the value of our rivers, forests, beaches and lakes and cared about social justice to remember that the challenges confronting New Zealand can't be tackled alone and that we are all in this together.

Our Green 2012 AGM and conference ended with the usual time of reflection and giving thanks to all who had contributed to another successful meeting. My own shared reflections recognized the growing strength of our Young Greens, who continually impress me by the knowledge, skills and wisdom they bring to our meetings and the greater maturity they display compared to myself at the same age. The fact that our Young Greens can be found throughout our Party in leadership roles gives me great hope for our future.

The Values story is far from finished and a Green Government is now a near reality for thousands of New Zealanders rather than a distant hope for a few enlightened people who dared to describe a better world forty years ago.

We also had a local body workshop and emerged with a collective sense that it is time for us to engage more strongly in local government.

We have to think global and act local if we are to turn around the degradation of our social and natural environment.
June 6, 2012 at 9:52 AM

bsprout said…
Thanks Neil, I couldn't attend all workshops so it is great to hear about the others.

You are quite right about the need to influence both local and national governance with our green values.
June 6, 2012 at 11:34 AM