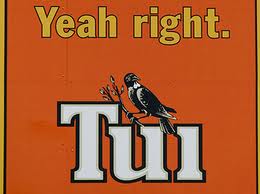 Given Hekia Parata's claims on National Radio, I felt the need to write another letter. I have covered much of this in an earlier post in more detail because the 250 word limit poses restrictions in including all of National's damaging initiatives.

The National Government is so determined to lift the "quality" of teaching in our public schools that they have:

Under a National Government we have seen our OECD ranking for water quality (the Yale report) drop from 2nd to 43rd and New Zealand was in the  top 5 for education when National took office but we have already seen a drop in science achievement.


Education Minister, Hekia Parata, claims that the National Government's changes are all about lifting the quality of teaching in public schools but all I can see is one hell of a Tui billboard!

Rachel said…
Hi Just to correct about the ECE funding leve. THey dropped the 80% funding level as well so that the difference you receive in funding for 50-79% and 80+% does not cover the salary differences for registered staff to reach this. So if you were in ECE for the money you would staff at 55% registered teachers and get a better financial return than breaking the 80% margin
May 29, 2013 at 12:14 AM

Jigsaw said…
You failed to add: allowed the NZEI and PPTA to dominate the education debate as though education was all about teachers and virually nothing about the children.
October 9, 2013 at 3:10 PM

bsprout said…
Jigsaw-you obviously haven't heard about NZEI's "Stand up for Kids" campaign, or understood the Government's agenda of supporting the rich over our kids who really need their support.