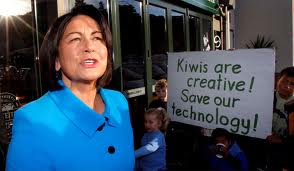 With her announcement today Education Minister, Hekia Parata, finds herself in an interesting place.

Tolley was useful to National because she actually didn't understand her portfolio and was able to arrogantly push stuff through with no lingering doubts that the profession may be right. Parata understands a lot more and her initial engagements with the profession has seen her put aside the tightly scripted speeches used by Tolley and strategically "speak from the heart". She often changes her language to that which is more palatable to teachers and quickly dropped talking about performance pay, for example, and has promoted robust appraisals instead.

I think she was probably handed a lemon with the teacher cuts, lacked good advice from her Ministry (the current CEO obviously does not have any appreciation of the New Zealand education system and culture) and felt obliged to carry it through. For someone who is generally very articulate she was reduced to the sort of banal statements or mantras used by Tolley as she was obviously struggling to make sense of it herself.

The decision to backtrack was probably a wise move because to push on would be hugely damaging to National when professional groups and unions were uniting with a single purpose and were being supported by parents. This was never going to be a battle that National would win.

While initially damaging to herself, Parata has shown some courage in pushing this turn around when many of her colleagues would likely refuse to back down to teachers under any circumstances (their dislike of teachers and their unions has a long history). The real test will be how she manages things from now on and if she truly engages with the profession and develops a more collaborative approach she may be able to salvage her reputation and win some respect.

With any National Minister there is always concern about what motivates and drives them, for many it is ego and feelings of aristocratic entitlement that makes being in power more important then what that power can achieve. I do not know enough about Parata to know what motivates her, whether the backdown is more about her own political survival or a genuine understanding that cutting teachers would actually compromise quality. She has a reputation for being difficult to work with and has lost a succession of EAs  in her brief ministerial career, but she still has two years to make sure that our education ranking doesn't go the way of our water quality and that will mean reversing much that National has done up till now.

robertguyton said…
I think you give her too much credit, Dave. She spun and spun and spun, day after day until finally being told to pull the pin. Where's the credibility, the integrity in that?
Not there.
Look forward to the next round of the same behaviour.
June 8, 2012 at 7:06 AM

Dylan VS said…
Good blog as always. I'd have to agree with robertguyton as it doesn't feel like she has done anything but buckle under the pressure. No credibility in refusing to interact with industry bodies such as PPTA ect. She should go...one step closer to the Key.
June 8, 2012 at 8:24 AM

bsprout said…
Robert, we all know that National hates teachers and their unions with an unhealthy passion, they have embarrassed them too often in the past. However, it is unclear who is driving education policy within the National Government, many claim it is English. Tolley was obviously a puppet minister and her tightly scripted and managed speeches were pure theatre.

Parata presents herself differently, she is able to speak without notes and can talk to the profession in their own language. We have even had some two way conversations that never occurred with Tolley.

Parata never came across as convincing and authoritative as she normally presented herself when attempting to sell the increase in class sizes. I fully accept that there was little credibility or integrity in the way this policy was progressed, but then again that just describes the general culture of this government. What we may never know is who actually made the decision to pull the pin, I have a feeling that if Tolley was still in the job the battle would be continuing.

I may be an optimist, but I do hope that there may be a twinkle of integrity deep within Parata that may allow for some real engagement between herself and the profession and that we can move forward with some level of collaboration. At least we owe it to our kids to try.
June 8, 2012 at 9:15 AM