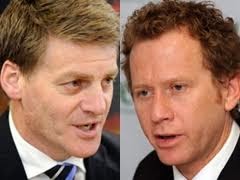 Russel Norman and Bill English were each grilled by Corin Dann on Q&A this morning regarding what should be done to better manage our economy.

Russel Norman came across as having a clear understanding of where we are economically and what we need to do so that all sectors will benefit. Bill was defensive, had no new ideas and was happy to have the Reserve Bank continue to operate with a limited tool box.

Under National Government debt is now well over $60 billion, our current account deficit is the 2nd or 3rd highest in the OECD, we have a huge shortage of affordable housing and power prices continue to rise above the rate of inflation. Russel was very critical of National maintaining tax cuts as a priority rather than paying off debt.

Bill was asked if he was happy with an increase in interest rates that will cause our dollar to rise in value, result in higher mortgage interest rates and put pressure on exporters again. He looked uncomfortable and said that the Reserve Bank operated independently and he wouldn't intervene. Russel was clear about what was needed, much of the inflation was caused by the supply and demand for housing and the growing cost of power. He felt that rather than the Reserve Bank being left to manage inflation, it should be tackled at source, we needed to better manage the housing market and we needed to deal with the unacceptable costs of electricity supply. Russel was also clear that we should follow the advice of the IMF and allow our Reserve Bank to have a wider focus than just inflation.


"...the crisis has made clear that policymakers have to watch many targets, including the composition of output, the behavior of asset prices, and the leverage of different agents. It has also made clear that they have potentially many more instruments at their disposal than they used before the crisis. The challenge is to learn how to use these instruments in the best way. The combination of traditional monetary policy and regulation tools, and the design of better automatic stabilizers for fiscal policy, are two promising routes. These need to be explored further." (Rethinking Macroeconomic Policy 2010)

Bill accepted that our economy was very dependent on protein exports to China, but he claimed that the Government was focussed on increasing our markets in Indonesia and the Asia/pacific. Russel was focussed on giving our manufacturers much needed support from a less inflated dollar so that they could more easily compete in overseas markets.

Bill claimed that the country would be better off with his steady as we go approach, which is largely about tinkering around the edges of housing and power supply and cutting government spending. After five years under his stewardship the light at the end of the tunnel appears to be still as far away as it was in 2008 and more families and manufacturers are suffering. Only the already wealthy have done well and many have done exceptionally well. The wealthy love the the high dollar because their purchases of luxury goods from overseas are so much cheaper. For families attempting to heat their homes and put food on the table and for small businesses trying to export their products, higher interest rates and a higher dollar will be crippling.

The Greens offer real progressive change in economic management that will properly target the areas that are not functioning well. We need to invest in things that will build economic resilience rather than get rich quick schemes and blanket cuts to government spending. We need to fix dysfunctional markets and allow businesses and families to thrive.

bsprout said…
Dave I am not that technologically adept but the base template I used was the picture format. Is this what you are referring to?
March 17, 2014 at 10:30 AM