TPPA, Protesting from Whangarei to Invercargill! 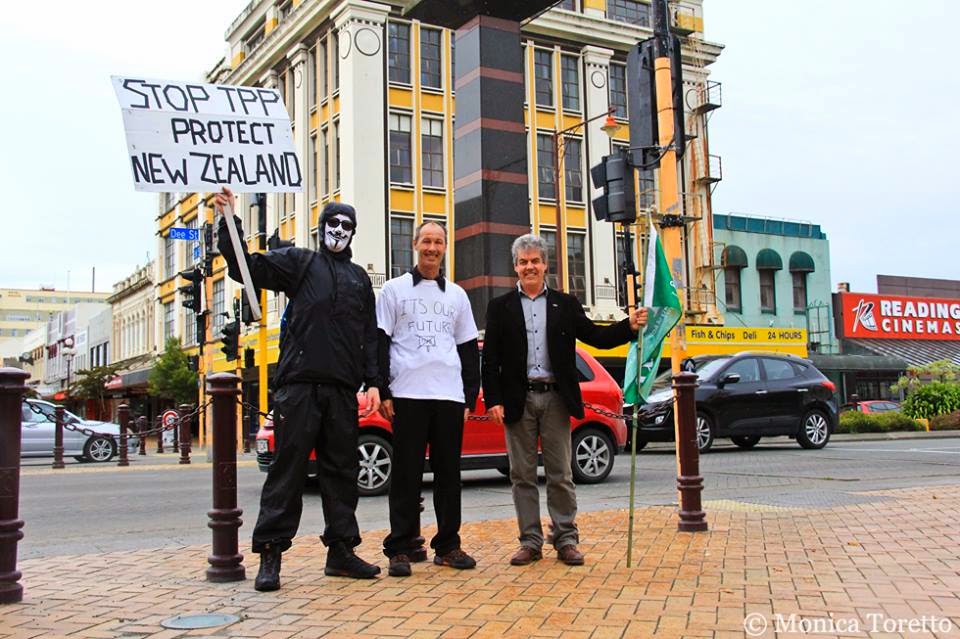 I was interested to note when I attended a talk from the Deputy Governor and Head of Operations of the Reserve Bank (Geoff Bascand) that he wasn't prepared (when questioned) to categorically say that it was the trade agreement that was responsible for our increase in trade with China. No research had been done to confirm it and we do produce reliable quantities of protein that they need.

Australia has not benefited from their free trade agreement with the US. The resulting trade has been to the advantage of the larger power and one would have to wonder how many Australian companies have folded because they can't compete with the influx of American goods. The US continues to protect their farmers and few trade barriers were opened for Australia, whereas Australian borders opened up considerably to US products. Our CER agreement with Australia hasn't stopped their supermarkets from blocking our products and it seems that larger powers tend to be able to manipulate any agreement in their favour.

While this Government is happy to negotiate the TPPA in secret one has to wonder why the terms need to be kept undercover unless there is something to hide. This shouldn't be about commercial sensitivities involving individual companies or industries but about broad terms of trade that will have far reaching ramifications. I cannot understand why our government cannot allow public scrutiny of the terms before signing as Malaysia is doing, their democracy is obviously healthier than ours.

The US government is known to be more and more under the influence of US corporates and multi-nationals. It is now almost impossible to pass legislation in the US if there is no corporate seal of approval. Millions of corporate dollars are fed into political campaigns ($300 million in 2008) and to pay high powered  lobbyists and the pay back that they expect is substantial. Our own Government is under the same pressure and has spent millions on corporate welfare (Warner bros, Rio Tinto, Kidicorp, SkyCity) and has amended legislation to keep corporate lobbyists happy.

Although TPPA negotiations are being conducted under a veil of secrecy enough has been leaked already that ring alarm bells. New Zealand is too small as a nation to have a great influence over major powers and we are already the third easiest in the world to do business in. If we give up anything else through negotiations we would just become a corporate lapdog.

The risks are many:

It is worth noting that opposition to the TPPA is coming from all participating nations, even the US, as they see the agreement favoring multinational, corporate interests to the determent of ordinary people and the sovereignty of individual nations.

The nationwide protest today involved cities from Whangarei to Invercargill and I spoke on behalf of the Green Party in our southernmost city to a crowd of concerned and receptive local citizens. 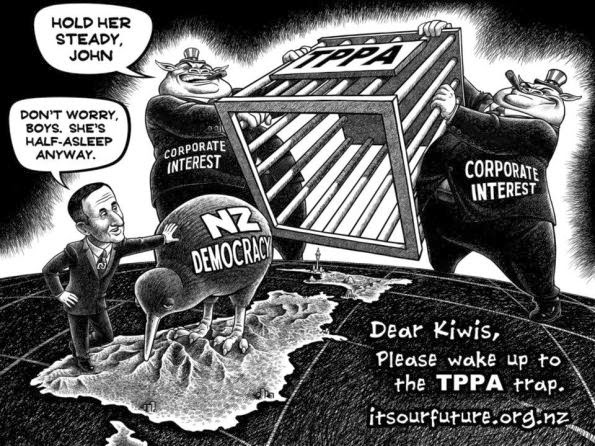