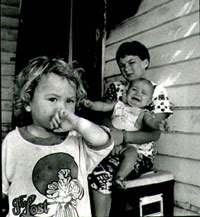 
What helps
We know quality ECE is linked to better educational outcomes later in life, and is a powerful ‘equaliser’, helping to reduce educational disadvantage among children from low-income households. Both New Zealand and international research confirms that attendance at good-quality ECE has lasting effects on educational attainment during school years. The countries that have maintained low child poverty rates tend to be those with a high rate of participation in state-supported ECE (Wylie and Hodgen, 2007).
An impressive body of research confirms that returns from quality early childhood education are high and long-lasting. Therefore, this is one of the most important investments a country can make (ECE Taskforce report, June 2011).
Early childhood services must be available and must include universal services, such as access to early childhood education, as well as targeted interventions, including: economic hardship, childhood disabilities, child maltreatment and parental substance abuse and mental illness. Programmes that combine child-focused educational activities with explicit attention to parent-child relationships appear to have the greatest impact. Longitudinal research indicates that generic programmes are less effective for families facing significant risk (Gluckman, 2011)


The Salvation Army Report Card had this to say about ECE in New Zealand:
To those that have, more will be given. The early rapid and now slowing expansion of spending on early childhood education has failed to bridge the educational disadvantage around unequal and unfair access to ECE opportunities. The current review of ECE by the Early Education Advisory Group ... should aim to provide ECE policy-makers with some insight as to why their policies have failed so miserably for Maori children and other children from poor communities. (Salvation Army, 2011, p.15)
We know that while schools and centres cannot completely overcome the devastating effects of child poverty, they can, make a major contribution to breaking inter-generational poverty, if they have resources in cross- agency strategies.
We know that unemployment, low-paid work, and the accompanying social, health and family issues - including child poverty - occur disproportionately in Māori and Pasifika families. Māori and Pasifika young people are at increased risk of a wide range of adverse outcomes, including educational underachievement, antisocial behaviours, problems with alcohol, mental health disorders and suicidal behaviours. We also know that part of the solution is to promote the great programmes and activities that are happening for tamariki Māori and tamaiti o Pasifika in schools, kura, kōhanga reo, language nests and early childhood centres throughout New Zealand. The provision of learning opportunities and resources in first languages encourage families to participate, assist children to learn and their families to feel valued members of school and centre communities.
Participation in high-quality early childhood education “can make the difference between having a life of poverty and dependence or a life characterised by on-going self-development and positive social engagement”. (Early Childhood Education Taskforce, 2011, June p.13). Good quality ECE, building on the foundations for literacy and numeracy in school are powerful antidotes to the risks associated with child poverty and deprivation (Fletcher & Dwyer, 2008). Schools and centres can be effective bases for non-stigmatising provision of nourishing meals and health services, and for engaging parents in their children’s education and care. School programmes can counteract deprivation by enabling children and young people to participate in cultural and sporting activities, homework centres and computing equipment (Early Childhood Education Taskforce, June 2011).
But the provision of these services comes at a cost – a cost that can no longer be met by the goodwill of boards of trustees, parents, schools and centres, educators and communities. Government must not promulgate policy that abrogates its responsibility towards children and families.


What’s needed
Probably the best barometer of national policy is the status of a nation’s children. The negative effects of poverty on all levels of children’s lives and in particular school success have been widely demonstrated and accepted. The critical question for us must be – can these effects be prevented or reversed?
In response to growing concern, the Government is now initiating yet another ‘national discussion around what’s in the interest of children”. This follows a budget that delivered little and promised nothing substantial for children (Else, 2011). NZEI believes that this is not the time for more “conversation” or months of public ‘consultations’ that reveal little that is not already known.
NZEI believes that there is no ‘magic bullet’ to cure the systemic nature of educational underachievement by children in poverty – but there is clearly a need to focus on developing a strategy that addresses factors both in and outside of the education system.
NZEI calls for a cross-party national commitment to raising the educational achievement of children living in poverty. This must include a celebration and promulgation of programmes which have been proven effective and the provision and resourcing of coordinated, sustainable wrap-around, cross-agency approaches and investment in our children – and our future.
NZEI believes the Government must develop and implement non-punitive policies and programmes specifically targeted at reducing poverty. This means a coordinated approach that relies as much on social assistance, health and housing improvements as it does on education.
NZEI believes the Government is doing little to combat child poverty. Casting stones at individual agencies, schools and services will not alleviate the problem. By ignoring it or throwing piecemeal solutions at it, Government is only supporting the growth of inequality and child poverty. Failure to address this issue will ultimately come at a huge cost to society as a whole.
Recommendations for Government


Child poverty requires a bold approach. This must include:
·      A fair and universal approach to supporting children to participate in society.
·       The development of a coordinated and audited cross-party/cross-agency approach that targets child poverty and audits the impact of Government policy on children.
·       A specific focus on quality public services for the early years to prevent poor educational outcomes which must include investment in high-quality publicly-funded universally-available early childhood education, particularly in disadvantaged areas, staffed by fully-qualified early childhood teachers who can deliver the ECE curriculum.
·       Investment in extra resources for schools and centres to support children in poverty to succeed.
·       Investment in parenting support programmes that support parents to engage in their children’s learning.
·       Investment partnerships between Government, schools/centres and the local communities to ensure freely-available food programmes and healthcare for low decile schools and centres so that all children have access to basic foods and healthcare regardless of the capability of their parents.
·       Investment in the provision of a living wage for all New Zealanders. The minimum wage should be 60% of the average wage.