Solid Energy and the Tobacco Industry 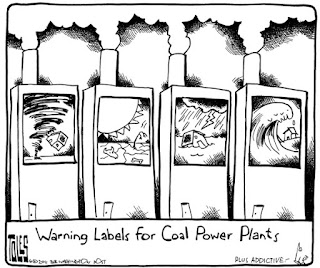 I can see many parallels between the coal and tobacco industries and this became more apparent with the attempts of Buller Coal and Solid Energy to have greenhouse gas discharges removed from consideration in resource consents applications. Buller Coal plan to mine the environmentally significant Denniston Plateau and Solid Energy hope to proceed with their Mt William mine on the West Coast (the Mt William mine alone would be responsible for releasing 11.5 million tones of carbon dioxide into the atmosphere).

Like the tobacco industry attempted, the mining companies are claiming that they can't be held responsible for the use of their product, they only mine the stuff. Solid Energy also tried to minimize the emissions that would eventually be produced by claiming that the gas released would be minuscule in a global sense (obviously every individual mining operation internationally could make a similar claim). The coal will be exported to China, India and Brazil and Solid Energy want our Resource Management Act to be more compatible with the climate obligations and controls of those we export to. We need to lower our standards to increase export opportunities.

The importance of job creation was also mentioned, with 225 jobs being created once the coal exports start flowing out of Westport. The tobacco industry also created lots of jobs but many had to be paid by the taxpayer as the health effects on smokers created huge demands on our health services. The external effects of such job creation are never considered and the future losses of employment caused by climate change will be significant.

In "Merchants of Doubt" Oreskes and Conway describe how the tobacco industry funded pseudo NGOs or scientific organisations to question science and to mitigate negative information. This also appears to be occurring with the mining industry here with the establishment of the pro-mining "independent" organisation Straterra. The main focus of this seemingly respectable organisation seems to be to question the science around climate change and the claims of those who question mining proposals. Bernie Napp the "Senior Policy Analyst" for Straterra rarely engages with the facts and science against mining and when pressured has to resort to some bizarre claims.

The positive element out of all of this is that the lies and misinformation of the tobacco industry were eventually countered and the truth won through in the end. Many of those opposing the expansion of the coal industry have huge credibility (Dr James Hansen, Dr Wright, Sir Geoffrey Palmer) and I'm sure in time we will win over the influence and interests of few profit driven miners and an ideologically blinkered government. I just hope that it doesn't take the decades of damage and debate that occurred with tobacco before our miners are brought under reasonable control.