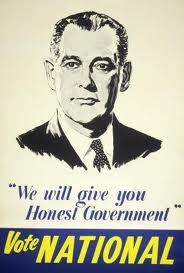 Derek Angus preceded Bill English as the MP for the old Wallace electorate (now largely the Clutha/Southland electorate). His letter in today's paper raises some serious concerns about the National Party's attitude to governance and makes some bizarre claims about teacher unions:

Not being a member of Dave Kennedy's school class, A C Clarke will fortunately be able to ignore the rubbish he printed in his response to her letter of February 26.

Mr Kennedy's ramblings clearly prove now that he has no experience or knowledge of the workings of governments once they are elected and sworn in as the government of New Zealand for the next three years and that's a fact.

Mr Kennedy should be aware governments are able to ignore citizens' referenda plus the Treaty of Waitangi Tribunal claims if they so desire and the New Zealand public every three years is able to show its support or rejection of that government's policies by way of a general election and that's what political democracy is all about in New Zealand.

The partial asset sale will continue in spite of Maori and Dave Kennedy and his socialist Green party bleatings whose only real policy to fix everything is just to crank up the printing press and print some more money.

Mr Kennedy might like to take note that after these partial asset sales New Zealanders will still own around $230 billion in government assets and should also own 80 per cent-plus of the partial sales of the assets.

Mr Kennedy might like to spare a minute to look at the prices of electricity being charged in New Zealand by Contact Energy, a fully privatised energy company which has the lowest power prices in New Zealand, and I wonder if that's what privatisation and competition can do.

This scandalous Novopay (or never pay) problems with the teachers' pay disaster scheme was initially signed off by a previous Labour Government Minister of Education, the Hon Chris Carter.

Mr Kennedy's teachers union had a representative on the working party which never even issued a squeak in two years on it.

Why then don't the teacher unions which are really just Labour Party or Green political branches, stop playing politics with the present education minister and devote some assistance to fixing the problems instead of just organising political protests outside National MPs' offices, which won't fix anything at all, will it?

Have a good day.


The letter from Mr Derek Angus (March 12) sadly epitomises the prevailing attitude towards governance that this National led Government has. To suggest that after an election democracy and good process should end is not a philosophy I share.

This Government continually runs close to the wind of what is legally possible and ignores good advice and proper process. The Ombudsman's report on the Christchurch school's closures revealed deliberate attempts to misinform and withhold important information during the consultation and submission process. This National led Government runs roughshod over the rights of ordinary New Zealanders when cutting government services and closing schools and yet bends over backwards to keep private schools open ($3.9 million to Wanganui Collegiate) or to give tax breaks to the already wealthy.

It also concerns me that this Government rarely accepts responsibility for its many poor decisions and shifts the blame at every opportunity (suggesting that teachers are also responsible for the failure of Novopay is a new low in this regard).

Abraham Lincoln described democracy as "government of the people, by the people, for the people" and for Mr Angus to openly promote the ability to ignore citizen's referenda and the Treaty of Waitangi just reinforces my belief this government doesn't care about the people it has been elected to serve.

Imagine the current National Party trying to run a election campaign based on honesty like they did in the 60s...

Keeping Stock said…
According to Phil Goff, we've already had a referendum bsprout; the 2011 General Election...

bsprout said…
KS, given the strength of feeling about the asset sales a referendum managed through the local body elections would be a cost effective way of deciding for sure. If support for the sales is strong then the the Government has a clear mandate to sell the rest. You should be welcoming the opportunity to have support for the Government's plans confirmed.

The cost isn't really an issue as it will only be a fraction of what Don Elder earned as CEO of Solid Energy.


Wait til Cam and David find out...