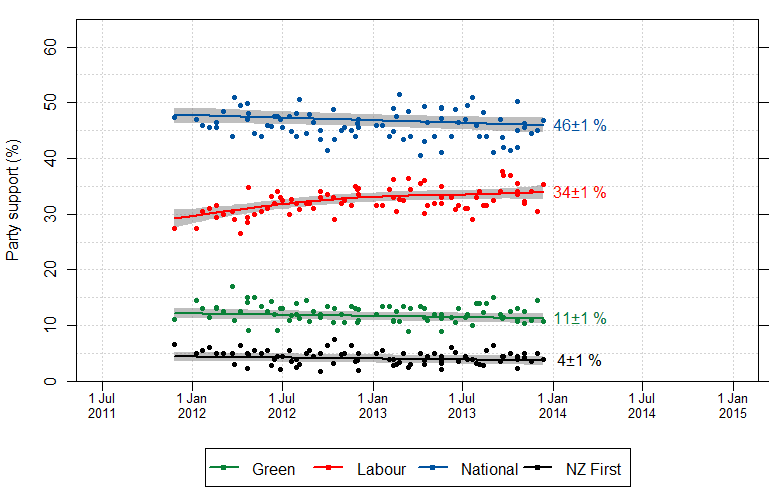 We have a number of polls that regularly inform us of the level of support for each of our political parties. Most people accept them as being impartially and honestly managed and as there is reasonably close similarity between them it appears to confirm their legitimacy. However, if I said that almost 20% of potential voters are excluded from being able to participate in the polls most people would cry foul, and yet that is most likely the case.

Almost all polls are conducted through telephone landlines and yet there are rapidly growing numbers of people who have ditched landlines completely. Halfway through 2013 almost 17% of those who participated in a Stuff poll didn't have a landline and another 24% were contemplating dumping theirs. Since it is largely those on minimal incomes or younger people who have opted for only having mobile phones, I think we can safely assume at least 20% of potential voters would currently be excluded from participating in most political polls.

The guidelines that are being developed for political polling make no reference to the fact that using landlines will skew any sample by excluding significant demographics. A large percentages of poor families and many of our Maori and Pacifika people will not have a landline and I think it would be safe to say that the majority of 18-28 year olds would only use a mobile. Roy Morgan does claim to also call mobile phones (and I thank Keeping Stock for pointing this out) but, as most are unlisted, it is unlikely that they would be calling many.

I believe that if polling did accurately cover all demographics of age, ethnicity and wealth (through greater use of mobile phones) we would get much different results. Obviously there is also the reasonable concern that if one party is perceived as more popular, it would cause some people to shift their support and become like a self fulfilling prophecy.

The crucial polls in any election are those close to election day. When we compare the average polling percentage for the National Party over the crucial week before the 2011 election we find some interesting data. The National Party averaged 51.4% over the five preceding polls which was 3.7% above their election result. We all know that many potential Labour voters didn't vote because there was a perception, based on polling, that National's support may even have allowed them to govern alone (a Fairfax poll even had them at 54%). Obviously anything above 50% creates a psychological advantage and if the polls had recorded their actual support in the upper 40s then many more may have felt encouraged to vote. As it turned out National ended up with a very slim majority and the 25% who didn't vote were most likely many of those who were also absent from polling.

Interestingly if we were to look at the averages over recent polls and compare them with just before the last election, National is averaging about 5% behind the polls taken before the 2011 election, Labour is around 6% higher and the Greens are about the same. Despite this, and the obvious advantage National has with polling, the Party is still being talked up by the media as possibly being able to govern alone. Based on the likely margin of error their real support would probably be around 46% and with no likely coalition partner.

Obviously I can't just blame the polls for the last election result, political parties still need to have smart campaigns and credible candidates but it would be fairer if skewed polls didn't have the influence that they do.

(The graph featured above is sourced from Wikipedia and uses averages across polls to track support.)

Armchair Critic said…
At this stage of the electoral cycle, a poll like this is bad for the government and good for the opposition. Anyone who supports National who isn't going "uh-oh" is in want of a few clues.
February 24, 2014 at 10:31 PM

bsprout said…
Let's hope so, Armchair, anyone trying to exist on the minimum wage (around 100,000 workers) would have been insulted by another meagre increase.
February 25, 2014 at 8:45 AM