Waitangi Day and the Right to Protest 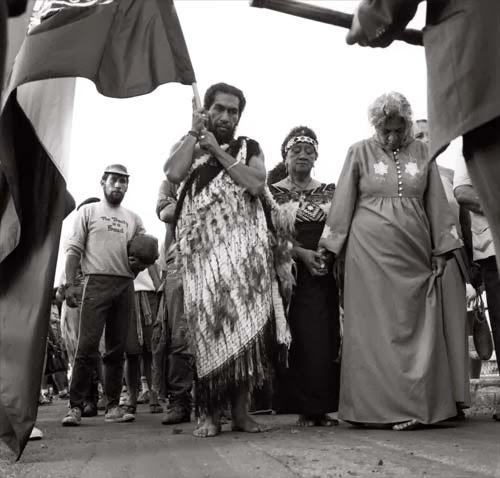 John Key's overly enthusiastic condemnation of protestors at Waitangi was another attempt to feed the perception that protest is unhealthy and unnecessary. It turns out that the Governor General wasn't under any threat and the scuffle was really a minor incident. I am sure that there was a tactical element to Key's comments given that the Te Reinga Hikoi against deep sea drilling was due to arrive the following day and he wanted to minimize its impact by labeling any protest as undesirable. His comment to reporters was cleverly worded:

"Most people go to Waitangi to have a great time but there are one or two people that go to cause trouble and use the media to advance their own causes and their own issues."

By making this statement Key was able to dismiss any other protest as just involving a few malcontents who are selfishly spoiling a nice day for a minority cause. What the Prime Minister conveniently refuses to recognise is the long history of protests at Waitangi that actually represented genuine grievances and concerns. Waitangi protestors are often denigrated at the time but history has generally revealed that the protests were justified.

In 1940 Apirana Nagata used Waitangi Day to challenge the nation's record of race relations, he observed that not everyone had something to celebrate.

Many young Maori staged a walkout during the 1972 celebrations in a protest against ongoing discrimination The Governor General at the time, Sir Arthur Porritt unfortunately remarked that he didn't believe discrimination existed and that relationships were being adequately dealt with through intermarriage.

Protests over the ownership of Bastion Point and the Raglan Golf Course dominated Waitangi into the 80s until they were rightfully returned when it was finally accepted that the lands had been misappropriated. Emotion dominated many of the protests over this period due to the understandable feelings of injustice and Waitangi commemorations included large numbers of police and security to maintain order.

The 1984 Hikoi was organised and supported by the Waitangi Action committee, the New Zealand Maori Council, the Maori Women's Welfare League,  Te Kotahitanga and Kingitanga (Maori King movement). It demonstrated that Maori concerns regarding te Tiriti were not just held by a few Maori radicals but were widely supported throughout iwi and across generations.

In 1990, the 150th anniversary of the treaty signing, the Anglican Bishop of Aotearoa Whakahuihui Vercoe stated, in the presence of the Queen, that the day was bound to produce tensions, no matter what the programme. He gave an emotional sermon where he stated "As I remember the history of our land, I weep here on the shores of the Bay of Islands."

Attempts to change the management of treaty claims and limit the compensation caused such strong feelings during the mid 90's that the Government felt forced to hold the official ceremony away from Waitangi. The Prime Minister at the time, Jim Bolger, also tried to ignore the previous history of protests and made the unusual claim "…there can be no going back to commemorate and celebrate Waitangi as it was. That is over."

In 2004 protestors used the day to highlight concerns about the Government's discriminatory seabed and foreshore legislation that blocked Maori from using the legal process to determine ownership. Helen Clark's handling of the situation did not help when a hikoi of around 20,000 people arrived at Parliament and she dismissed it with the insensitive comment that she preferred the company of Shrek the sheep over the 'haters and wreckers' gathered outside. Don Brash found himself pelted with mud in the same year as he arrived for the 2004 Waitangi celebrations. He had recently made his infamous Owera speech in which he claimed that Maori had advantages over other New Zealanders and that they were abusing those advantages. This surprised and angered Maori who dominated our prisons and poverty statistics and were continuing to fight the obvious discrimination that existed in many laws and further their legitimate claims through the Waitangi Tribunal.

The expectation that Waitangi Day should be a peaceful celebration of a coming together of two peoples is unrealistic when there continues to be discrimination and bullying from successive governments. While Key and his predecessors are quick to complain about the verbal and occasional physical abuse they are subjected to on one or two days a year at Waitangi, many Maori are justifiably concerned at the covert violence that occurs against them every day as each piece of discriminatory legislation is passed and legal rights and due process continue to be denied.

This year's Waitangi protest is mainly about off shore oil drilling, the Government has already limited protests, and has so far refused to consult iwi on drilling proposals despite their historical and ongoing connections with the seabed and foreshore. So much for recognising the concept of partnership enshrined in te Tiriti and the importance to Maori of protecting kaimoana. Under John Key the arrogance, cultural insensitivity and discrimination continues and so will the protests.

Ray said…
But the Media claim that this is the most peaceful in living memory. Certainly the drilling protest looked a fizzer with less than 60 by my count
February 6, 2014 at 7:45 AM

bsprout said…
Ray, apart from the odd individual I think protests are generally more peaceful. Most people get the fact that if violence occurs the message is lost. In this case the hikoi represented a small Northland community protesting about the proposed exploration in the Reinga Basin off ninety mile beach. It wasn't a nationally organised event and having huge numbers wasn't the objective.

What impressed me about the day was the great effort from Hone and all political parties to ensure the day went well and have the focus on dialogue. The point of my post was in relation to the substance behind past protests and the fact that protesting at all has been seen as a terrible disruptive thing. Normally protests are the result of blocked avenues of communication and a refusal of the Government of the day to engage.

I actually liked the invitation from the Prime Minister to have the leader of the Hikoi visit Parliament and talk to Ministers about the oil exploration. It obviously would have been better to have had this happen before the consents were confirmed but it is still something positive. I hope that he will be allowed to be accompanied by someone with knowledge of the industry, otherwise it will just be a PR stunt.

Ray said…
Fair enough, I was also impressed by Hone, less so by other members of his family, Waitangi Day is not all about them
Your comment about the Hikoi Leader needing a "to be accompanied by someone with knowledge" presumably not an oil executive :-)
Could be claimed to be paternalistic or worse, certainly reminded me of the Commissioner who travelled with the Soviet troops to make sure there was no back sliding
Presently reading about the Spanish Civil War
February 6, 2014 at 10:56 AM

bsprout said…
The man leading the Hikoi seemed earnest but not with a high level of knowledge. If I was entering into an important contract, as an example, I would want the support of a lawyer. John Key has made a public challenge to this man that if he finds what he hears acceptable he needs to tell his people. If he alone is left to judge what is factual or not (I have been to Shell's presentations) it will be an unreasonable task. You may call my approach paternalistic, but I would have thought it realistic.

Solid Energy was able to convince most Southlanders, with slick presentations that their lignite plans were the best thing since sliced bread. We have been left with a hulking $30 million dollar mothballed briquetting plant that is too dangerous and inefficient to be ever be put into production and a whole pile of empty promises.

bsprout said…
It looks as though the hikoi numbers grew today to hundreds of participants: http://www.stuff.co.nz/national/politics/9692515/Hundreds-join-anti-drilling-hikoi
February 6, 2014 at 6:13 PM