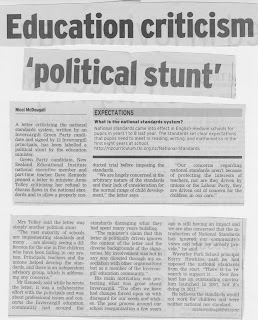 It is interesting how any activity opposing National Standards is a "political stunt" according to the Education Minister. The 750 principals who voted no confidence in the Standards at their conference, the myriad of academics who have written about their concerns and around 350 schools that initially refused to include the Standards in their charters.

While it was unfortunate that my political background gave the Minister an opportunity to dismiss a letter signed by almost all the primary principals in Invercargill, it stretches credibility to accept that all of those principals are at the beck and call of the local Green Party candidate. The Minister also ignored the collective action taken by many of the same principals without my involvement.

The Minister again provided her standard lines of misinformation:

"The vast majority of schools are implementing standards..."
This ignores the fact that they have been forced onto schools as a legal requirement and most do it reluctantly. The level of implementation varies widely and few have fully embraced them. It is extraordinary that over a 1/4 of schools feel so strongly about the standards that they have refused to comply despite the potential ramifications.

"and many... are already seeing a difference for the one in five children who have been failing in our system"
While there should always be concern for lack of achievement, to credit a flawed assessment system for raising achievement is also a stretch of the imagination. As far as I know there has been no research to support such a statement, however, there is evidence that the narrow focus on literacy and numeracy has seen a drop in achievement in science.
Research on the impact of poverty on academic achievement suggests that unless children come from homes where their education is well supported, schools will always struggle to address underachievement.

"Principals, teachers and the unions helped develop the standards..."
Early on there was some involvement with the profession, but at a very minimal level. While our new curriculum took five years of collaborative work, the National Standards had no such process. They were largely developed within the Ministry office over a few months and we just had to watch the gradual evolution of the standards on the Ministry website after they were legislated. Even the facilitators leading the initial professional development were presenting information that conflicted with the moving feast appearing on the ministry site during the first months of the implementation. Calls for a trial were ignored.

"...and there is an independent advisory group, which is addressing any concerns."
The Education Institute tried to work with this advisory group but withdrew when told that the group could only address the manner of implementation, not any concerns with the standards themselves.

It is interesting that while opposition is labeled political, the Minister ignores the political nature of her standards. The very idea was an election platform for the National Party, the initial information pamphlet came from the party, not the Ministry, and the driving argument for introducing the standards has been the political mandate claimed by the National Party rather than the weight of researched evidence.