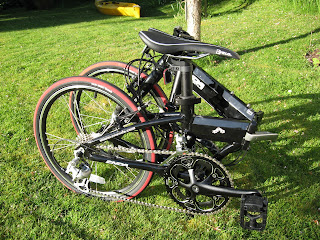 Young English relatives were staying with us a couple of years ago and I was intrigued by the passion one had for his folding bike. Ed works in London and has to travel to work each day on the underground and would cycle the last part of his journey. Folding bikes are easy to carry onto public transport as the best of them are very light and can fold into a manageable size. If the weather was fine he would cycle a larger portion of the trip or take a more scenic route home.

Ed owns the Rolls Royce of folding bikes, a Brompton, and he has even competed in the annual Brompton World Championship Race. This race occurs around Blenheim Palace and all competitors must wear suits and ties, despite this it is still very competitive and many professional racing cyclists take part.

I became interested in the concept as I often have to fly to meetings and use taxis and buses to complete my journey. The idea of having my own transport available on arrival, and be truly independent, strongly appealed. I have always been a keen cyclist and first got involved in cycle touring in 1980 when few bicycles were seen on our open roads apart from the occasional racing cyclist. I loved the fact that you could truly experience the environment you travelled through and relied on your own energy to do so. I have cycled throughout New Zealand, much of Europe and parts of Scandinavia and found it to be the best (and cheapest) way to travel.

Folding bikes have a large following in the UK and much of Europe and there's a huge variety of bikes to choose from, depending on your needs and budget. The best cost thousands of dollars and contain the highest levels of cycling technology. I was especially interested in an American brand of folding bike called Bike Friday that can be transported in a suitcase that doubles as a trailer.

However, the $3,000 dollar plus price tag was beyond what I could afford or be able to convince my wife was an essential purchase. I already owned three other bicycles and our family have more bicycles and unicycles (my son) then would be considered normal. 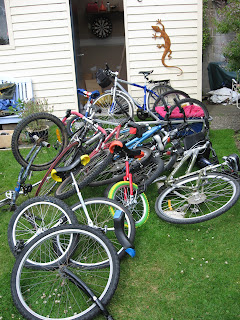 By chance I found a new, inexpensive and relatively high quality folding bike on Trade Me and soon I found myself an owner and convert of this highly versatile form of transportation.
My first folding bike originated from Hong Kong and was well constructed and had 7 gears. Despite lacking in a high enough gear to really compete with a standard bike, I could still cycle from Wellington airport to the middle of the city in 20 minutes. For two years this little bike has been a constant companion as I attended numerous meetings and conferences around the country. 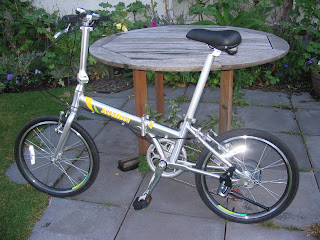 The only issue I have had with this bike is its lack of speed and when cycling around Wellington's waterfront amongst other cyclists I have often wished I could keep up with the Trevor Mallards of the city. I do have a slight competitive streak and would love to cycle past one of those lycra covered fanatics on something that doesn't look as though it could.
Today I achieved what has been a mere dream earlier. I am now the proud owner of a Chinese version of a folding bike that will give any road cyclist a run for their money. It has 16 wonderful Shimano gears
and my first test ride put a smile on my face that lasted for several hours, watch out Trevor! 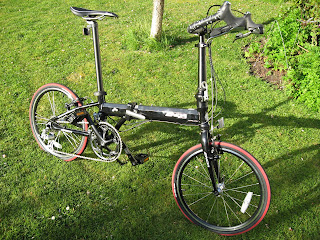 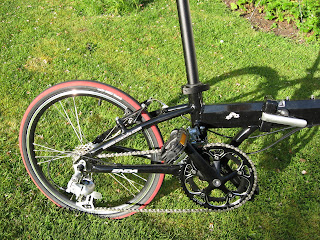 Footnote: My wife put her foot down and has insisted that I sell at least two of my other bicycles :-(

Anonymous said…
I agree bromptons are definitely the nicest small wheel folders. I recently checked out some folding bikes made by Montague Bikes. They use large wheels and all standard bike parts. Kind of a cool alternative if you want a folder that rides more like a traditional bike but you can still fit in a car trunk.
November 4, 2011 at 10:45 AM

Unknown said…
There are a myriad of folding bikes nowadays since your last post and I'm so glad for the convenience that our new technology has given us. I've been cycling for years and had my trusty folding bike with me. It's a convenient way to travel through peak traffic and impossible demands for taxis. The Montague line is awesome and I can't say enough of good things with this folding bike. Yes, it is pricey but boy, sturdiness is the middle name of this baby. Unfolding and folding is also a breeze, so what more can I ask for? It's featured here in this site and so are a couple of the best folding bicycles: http://myoutdoorslife.com/gear/biking/the-best-folding-bicycle.html
April 2, 2017 at 4:03 PM