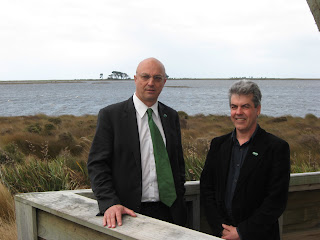 Kevin Hague and myself standing on the Waituna viewing platform
The fate of the Waituna Lagoon will be the real test of this National Government's resolve around the state of our rivers, lakes and wetlands. There are enough environmental reports, including one from the Auditor General,  to indicate that we have reached a crossroads in terms of our freshwater management, especially since 80% of our lowland rivers are now significantly degraded.

The Waituna Lagoon is at the point of flipping and earlier this year Russel Norman spent considerable time talking to all interested parties, from farmers through to DoC, to get a real grasp of the realities of the situation. Since that time there was some hope that the government's Fresh Water Management Policies would give regional authorities some regulatory teeth. Sadly (and please forgive the pun) the original document was watered down to the extent it is largely ineffective for dealing with any crisis.

Southlanders are becoming increasingly aware that Environment Southland is struggling and lack the resources and the authority to effectively do what needs to be done. Although it is intensive farming that has largely contributed to the rapid decline in water quality, many farmers had set up their farms under a different regulatory regime and they should not have to shoulder the total cost of putting things right. If a collaborative approach is to be successful, good farming practice needs to be recognized and costs shared. Environment Southland does not have the ability to pay compensation or fast track necessary remedial action and many good farmers feel they are being demonised by the media.

The Southland Times has recognized that the solutions for fresh water management are actually political ones and that there is a great opportunity to galvanize thinking and potential action by making it an election issue. Their poll on the level of public concern shows (at the point of writing this) that 66% of respondents support the view that water management is the defining election issue for Southland and this reflects the conversations I have had while campaigning.

It was useful to have Green MP Kevin Hague visit today, following up on Russel's earlier visit, and see for himself what progress had been made as regards the Waituna. The presentation from Environment Southland scientists just supported what had been presented to Russel a few months earlier but evidence of degradation had become even more prevalent. The sense of urgency and frustration from these scientists was evident as they were virtually tracking the imminent demise of the environment. What was also concerning was the fact that one scientist had shifted across to Environment Southland from DoC because of the widespread cuts to the department. Despite the need for good science to drive any action the financial support for this to occur was being actively reduced.

Kevin, when interviewed, was very clear about what need to happen. Central government had to intervene to create the urgency needed (as they did with Auckland's RWC transport issues) and provide the financial support to compensate farmers where necessary. There has to be an immediate reduction of stocking levels in the catchment to get the 50% reduction in sediments that is needed to avert flipping.

What is totally nonsensical to me is that $11.6 million is being provided to restore Lake Ellesmere (which is already dead), yet the Waituna is still living and has been effectively ignored. Considering the international status of the Waituna Wetland, its flipping will do nothing for our already tarnished "100% Pure" image.

Colin McIntyre said…
To test the validity of this online poll I have attempted to vote several times and in most instances my votes seem to be recorded.
It is feasible that others could be doing the same.
As the results are skewed in MHOP the poll should be declared invalid.
October 30, 2011 at 11:11 AM

bsprout said…
If that is true, then I would have to agree with you, Colin. I would also suggest that those that don't care about our water may not bother to vote which may also effect the accuracy and I would never say any kind of poll reflects the reality, it is just an indication. What I would say, however, is that even if only 50% of Southlanders think water is an important issue it is still significant. What I can also say is that when I have been talking to people in the Invercargill electorate it is noticeable that our rivers is the most common concern that is expressed.
October 30, 2011 at 11:23 PM