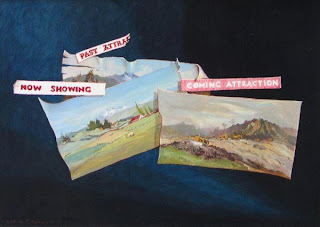 Thirty years ago there was an awareness and interest in the extensive lignite deposits in the Mataura Valley and the possibility of mining it. Artist Wallace Keown, well known for his atmospheric landscapes and thought provoking abstract paintings, was so incensed at the possibility of losing the wonderful farmland to opencast lignite mines that he created a painting as a visual representation of his concerns. Wallace explained to those who attended the opening of his exhibition that, at the time he painted the picture, movie theatres promoted their movies with colorful posters at their main entrance. He had the idea of showing how the Mataura Valley had changed through human intervention with overlaid poster images as if representing past, present and future movies.  The mining never eventuated, because even in those days it was recognized that lignite was a poor alternative to other energy sources, Wallace put the painting aside and it was forgotten.

Thirty years later Wallace had a retrospective exhibition in Gore's ArtSouth Gallery and the mining painting re-emerged as he sorted through his older works. The renewed interest in the lignite and the extensive plans of Solid Energy made the work very relevant again so he included it in his exhibition. The painting caught the eye of John Purey-Cust, a retired forester and Coal Action Murihiku member, who saw the painting's potential to support the campaign against the lignite mining and he promptly bought it.

Wallace's painting now appears in three large poster that will provide daily reminders of what Solid Energy is planning to do and what we stand to lose to anyone passing through the centre of Gore. While it is wonderful to have the use of Wallace's painting it is also sad that we still need to, thirty years later. It is also depressing that ten years after the painting was completed the New Zealand Government attended the Earth Summit in Rio and committed to reducing our climate emissions, however, in the twenty years since our emissions have actually increased and mining the lignite will considerably add to our worsening position. 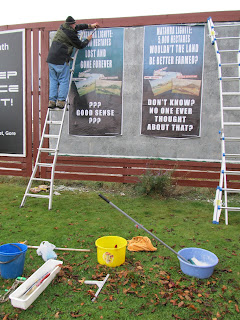 Alan up a ladder 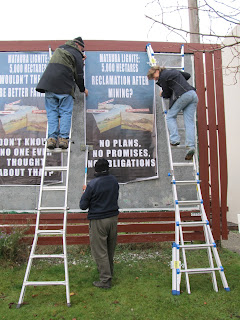 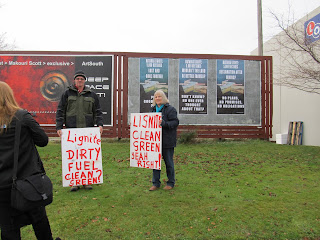 Alan and Chris with local media 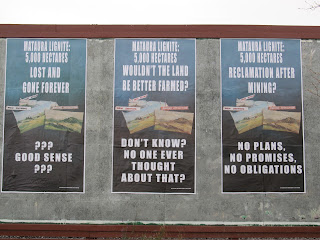 The final result, read and think! 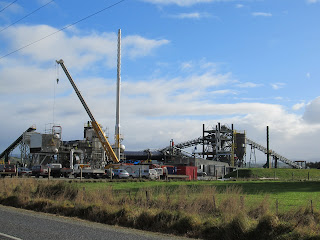 Solid Energy's lignite briquette factory nearing completion, as seen on our journey back to Invercargill.