Power Companies and the Holy Grail 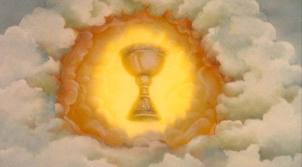 Early last year, around the time of the Christchurch earthquake, there was a knock on our door. I discovered on our front step a very friendly man holding a clip board. He was promoting a new energy company and he was very persuasive.

This company, he promised, charged less than any other company and would ensure a meter reading every month. We were with Meridian at the time and we were frustrated by the fact that meter readings had become reduced to only once or twice a year and after a series of estimates we would find some bills of less than $100, then others close to $900. I got into the habit of paying a bit extra on our Winter bills so that a later blowout could be managed.

The salesman explained that the company he represented, Just Energy, was able to keep prices low because advertising and sponsorship expenditure were kept to a minimum. After a little research to confirm they were legit, I signed on the dotted line. We had an initial glitch when our final account from Meridan was an over-estimate ($200 worth) and involved many phone calls to sort out liability and a refund, but eventually we enjoyed our regular readings and consistent billing.

A couple of months ago a letter arrived:

"Just Energy electricity prices will increase from 1 April 2012... Costs are being increased by Transpower...also price hikes by line companies..."

Despite having one less person in the house and installing solar water heating our bill was back up to previous levels.

A quick visit to Consumer's "Powerswitch" site saw that returning to Meridian would save us $701 a year and they now had the third highest customer service rating. We have made the switch back but, if the asset sales go ahead, who knows what will happen.

Finding the perfect power company is like searching for the Holy Grail and I am in danger of wearing out my coconut shells as I gallop hopelessly about in ever decreasing circles.