National's War Against the Poor 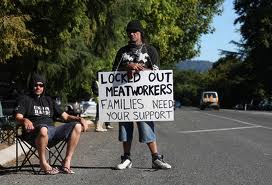 Rather than a determination to battle poverty this government has decided to fight the poor instead and together with their corporate mates they have devised a battle plan that mirrors the "war against terror". To gain public support for growing an effective arsenal in any war, one needs an enemy and that enemy must be perceived as a real threat. For Bush, the threat of a few radical terrorist cells could not justify a full scale mobilization of the US military so the implication that the Islamic world, as a whole, threatened US security was necessary. Islam became the new Communism and the American public allowed billions to flow into costly actions (and selected corporates) against a largely fictitious enemy.

On a smaller scale the same approach is happening in New Zealand. The National Party had their campaign largely supported by their corporate mates and once elected some form of payback was expected. The tax cuts to the already wealthy was intended to be a fiscally neutral gift but the growth in revenue generated from a rise in GST failed to eventuate.

To justify and fund the continuing costs of the tax cuts (around $2 billion so far), and to explain falling government revenue, blame had to be shifted elsewhere. We are being told that state servants, those on the DPB, nonworking mothers, students, unemployed youth and striking workers are the people we need to target. Of course such groups are generally deserving of support and there are many anecdotal examples of hardship amongst them, therefore a deliberate strategy to demonise and undermine their credibility was necessary.

It is now common practice from both the government and employers to publicly release, or leak to right wing bloggers, damning information on individuals to discredit the group as a whole. Paula Bennet started the practice and it has continued with the POAL and Talley's. Rather than debate the issues and the facts it is far easier to make it appear that a few cherry picked examples reflect the situation as a whole or make sweeping statements not supported by fact.

Like the War against Terror, the war against our poor has become more ideological in nature, any backdown is unacceptable, even when the costs of defending a stand become irrational. The POAL lost far more (around $20 million) from locking out workers than they would have done had they settled earlier. AFFCO's lockout has cost the taxpayer thousands in emergency benefits, while AFFCO saved money by staging one lockout over a statutory holiday. When a struggling caregiver took legal action to have his status recognized and be paid for his work, the government spent $1.1 million fighting him through several lost decisions. Although the latest Court of Appeal decision again found in favour of the caregiver, Tony Ryall is considering a continuation of the battle.

Despite the uneven odds, and the fact that the enemy is actually groups of ordinary citizens and workers who are fighting for basic human rights, the Government and big business are demanding even more firepower to deal with dissent. The proposed changes to employment law will allow employers to remove themselves from bargaining as soon it is apparent that they will not get their way. The Government claims it is necessary to stop lengthy disputes (presumably in reference to POAL and AFFCO) but the underlying assumption is that it is the employer that needs the support, not the workers, which is clearly not true.

While we have not quite reached the extremes of the US, in terms of inequities and the plight of the poor, it is obvious that this government is oblivious to all suffering in a frantic attempt to maintain the advantages and privileges they have given to the wealthy. The war on the poor continues...

The following images of tent communities of homeless people in the US, represent what happens when inequities reach extreme levels in a supposedly affluent nation. While 1 in 50 children are now homeless in the US, does the fact we have almost 1 in 4 children living in relative poverty make us much better? Interestingly when a republican politician was questioned about the growing number of tent cities he made the bizarre comment "I don't think anyone is going hungry" which is very similar to an opinion John Key expressed recently (but I can't find a link to). 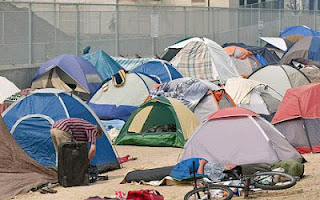 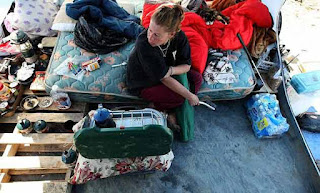 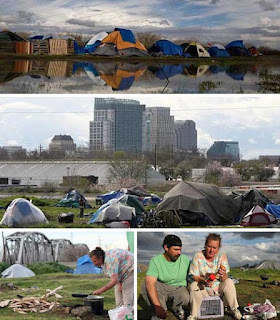 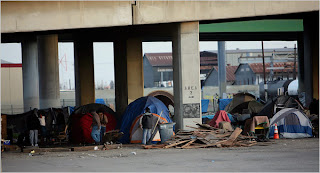 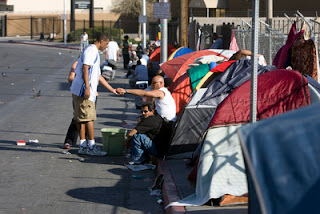 Anonymous said…
Re Key's comment on the poor:
http://www.nbr.co.nz/article/key-stands-some-poor-make-poor-choices-foodbank-comment-nn-86501

"But it is also true that anyone on a benefit actually has a lifestyle choice. If one budgets properly, one can pay one's bills," Mr Key said.

bsprout said…
Thanks for that link, Kerri, I would like John Key to attempt to survive on New Zealand's median income ($27,000). Life style choices indeed!

Many budget advisors have claimed that no amount of budgeting will help those on the lowest incomes.
May 15, 2012 at 4:08 PM

bsprout said…
Towack, I'm impressed. I live in Invercargill on a quarter acre section, I grow fruit and vegetables that makes us self-sufficient for half the year, I am a keen cyclist and only use my car when necessary, I've paid off my mortgage and our use of solar water heating has reduced our power bill considerably so I too could live happily on much less.

Some people aren't lucky and many people have circumstances where, even with all the best intentions and support, 25k would not be sufficient. While good management is important, should people be forced to live on incomes where choices are always limited and economic independence impossible?
May 18, 2012 at 10:06 AM