HMS National, Off Course and Leaking! 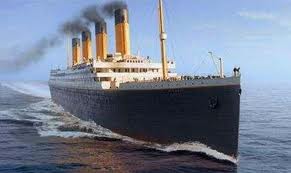 Captain Key and his crew have built their remarkable ship HMS National using their traditional methods. They weakened building regulations to enable fast construction and have made sure the 1st class facilities were of the highest specifications. They ensured that the third class facilities were the cheapest possible and cut back services to a minimum. Their officers were paid the highest possible salaries and the crew were employed on the lowest wages. Brownlee, the ships engineer, loved coal  was adamant that the ship be powered on this fossil fuel, using engines well and truly past their use by date.

Soon after the ship set sail there were problems. The crew complained of their low wages and long hours and many jumped ship to HMS Australia cruising nearby. The third class passengers complained of cramped facilities and lack of food, many became stressed and took their frustrations out on each other. Bennett, the ships purser, castigated the fractious lower class passengers and claimed that their intolerable living conditions were no excuse for their behaviour. She also cut rations to the lowest class of passengers because, as they didn't pay a full fare, they didn't deserve them. Some of the 3rd class children ended up suffering from lack of food and poor health but this was blamed on poor parenting.

Leaks started to appear in the ship because of the lack of regulations and appropriate checks during the construction and the crew spent much of their time trying to fit patches and manning the pumps. Of course they got no extra pay for the extended hours, but the officers got another pay rise and extra brandy.

Many passengers were concerned that the ship was veering off course but English, the First Officer, claimed his course was fine even though he wasn't using the latest charts. Worrying vibrations began to be felt throughout the ship and many thought that it was being pushed too hard and the engine was under stress. Norman, a junior officer, suggested that some easing of the engine boiler pressure was needed but he was ridiculed by English.

Anonymous said…
I'd level this at least 5a for audience awareness....