Flatlining Literacy, What to Blame? 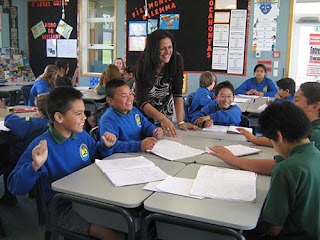 There was more anguish expressed today about the languishing rates of literacy in New Zealand and commentators and experts are pointing their fingers at where they think the blame should lie. Much of the criticism is being based on data and I heard few comments based on qualitative research.

PIRLS is the most widely regarded international assessment on literacy and is useful for comparing the performance of our education system to those of other countries. New Zealand has consistently scored amongst the the best in the world for many years but it has become apparent that while many countries are trending upwards with their results, New Zealand's achievement levels have remained static over the last ten years.

As appears usual, the blame for the lack of progress in literacy is being placed firmly on our education system and I heard especially strong criticism of our Reading Recovery programme. Again we have concern expressed about Maori and Pasifika achievement and how we are still failing these children.

While it is always good to reflect on the performance of our education system and look at where further development may occur, we will make little impact on achievement if this is where we focus all of our energy. Margaret Wu is a respected authority on assessment and is also involved in PIRLS. Based on her own extensive knowledge and research she claims that the influence of teachers and schools on a child's academic achievement is much less than we would imagine. When all influencing factors are accounted for (family income, culture, language, disabilities...), the impact of teachers makes up only 10% of all determiners. Even if we were to double the performance and effectiveness of our schools, 80% of the factors that are impacting on a child's learning would be beyond a school's control.

When one looks at all the other influences on children's lives, and what has been happening in New Zealand society over the last ten years, one will realise that it is remarkable that we have managed to maintain achievement levels as well as we have. Our teachers and schools have actually done a remarkable job in an environment of increasing challenges. I wonder if any of those demanding even more from our education system considered any of the following:

If we are wanting to target funding or attention on something that would make a significant impact on children's learning, why don't we start by making sure that the environments where children spend the most significant part of their lives are the best that they can be? If children walk through school gates having eaten breakfast and come from a well resourced home and a supportive whanau, then teaching and learning must benefit. Interestingly the Government is spending millions on measuring literacy and refuses to measure poverty.