The Sun Shone on the Waituna 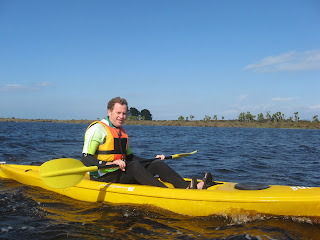 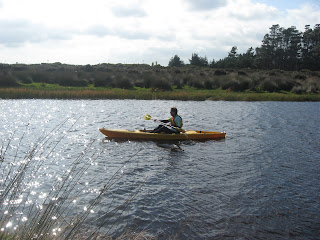 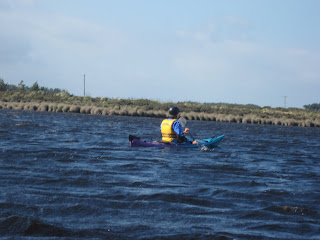 The sun shone, the water sparkled and the birds exploded into the air as our kayaks approached. The Waituna Lagoon may not have the towering grandeur of Milford Sound but it has its own wild beauty that is appreciated with a passion by the local residents who have fished, shot ducks and watched over it for generations. Local Ngai Tahu have revered the lagoon for centuries as one of their most important sources of food and both long and short finned tuna (eels) can be found here in abundance. The international importance of the Waituna Wetland was established when it was the first in the world to be recognized by the Ramsar Convention in 1976.
One local farmer feels a connection more than many after his dying father told him that it was now his responsibility to look after the "lake". This resulted in him giving up half his farm to act as a protective buffer between the lagoon and the farmed land beyond. Another farmer told us with understated feeling that he just wanted his children to experience the lagoon as he had.

Knowing these stories and this history made it especially painful when I listened, with Russel Norman, to the data being presented by DoC and Environment Southland scientists. The levels of nitrogen and phosphorus have steadily built over time and the last three years have seen a sudden and rapid deterioration of the lagoon's ecosystems. The lagoon is at imminent risk of "flipping" and it has only been a combination of dry weather at a crucial time and good luck that has stopped it from happening before. Flipping would turn the lagoon from the clear water that exists now, supporting a myriad of birds and plant species, to a turbid, murky mess dominated by algal slime. Once flipping has occurred the chances of pulling it back are near impossible and the expense of attempting it would be huge.

We met with members of the Awarua Waituna Advisory Group, the Waituna Landcare Group and some local farmers in the old Kapuka South School, now a community centre and home of the local gun club. The majority were locals who had their family roots established in the area generations before (one farmer felt the need to apologize for having arrived into the district only seven years earlier) and they all came with concern clearly etched on their faces. They were worried about their lagoon and some were concerned that possible solutions may affect their livelihoods. They knew urgent action was needed and one farmer had even brought a list of possible improvements to farm practice that he thought could make a difference.

The messages that Russel brought to the gathering were tough ones, he likened the lagoon to a patient in intensive care and needing to be put on immediate life support. If we had a human patient at deaths door it would be considered gross malpractice to continue injecting the cause of the illness while hoping a few minor improvements would see a gradual recovery. If the lagoon was at the point of flipping we needed immediate action and the high levels of nutrient input had to be immediately and drastically cut.

Russel admitted it was a hard message but there was no alternative but to quickly reduce stock numbers in the immediate and wider catchment. The regulated farm effluent accounted for only 10% of the extra nutrients that entered the environment, the majority came directly from the animals themselves as they grazed in the paddocks of grass or winter feed and every fall of rain exacerbated the problem and a major storm could easily form a killing blow.

I noticed nodding heads amongst many in the room and I knew that the life of the lagoon was something they were more than prepared to make sacrifices for, however the general farming culture had changed over the last ten years and those who had strong family connections to the area were rapidly becoming the minority. As we drove the gravel roads towards the lagoon I became aware that the names of the farms we passed were less likely to end in "dale" or "vale"  but "investments" or "corporation". Such farms often employed short term managers with different value sets and operating agendas than those of the group we met today. Such managers tend not to be swayed by the local's passion for protecting the environment as they attempted to maximize profits for their employer. The only directions that these managers needed to follow, other than those from their employer, were the enforced requirements from the local regulatory authorities.

If we are to make any difference at all, local councils need the legislated strength to do their job properly and currently there is a noticeable vacuum at national level where clear and consistent direction is needed. It was pointed out to me today by an Environment Southland councilor that a model of effective regulations already exists for air quality, we now urgently need them for water!

bsprout said…
Thanks Robert. Isn't it a pity that mainstream media doesn't pick up on these events, if they did we would be challenging Labour in the polls. Getting into a kayak to view endangered environments makes so much more sense than riding a motorbike because you can.
April 10, 2011 at 10:13 AM

Janine said…
Lake Taupo, Lake Omapere, Hokianga Harbour and doubtless many other lagoons, lakes, harbours and rivers around the country are suffering from the same thing. Russel has been talking about this and gathering information for years now - I wonder at what point he will be taken notice of by the majority?
April 10, 2011 at 2:43 PM

bsprout said…
Quite right, Janine, but I think it isn't the majority we need to convince, but the Government. It is only by drawing a regulatory line in the sand that anything will change. Currently if air pollution reaches certain levels immediate restrictions on fires etc are put in place, this doesn't occur with water. Unless the cause of the problem is removed from the environment, or immediately managed, the damage continues.
April 10, 2011 at 2:52 PM

robertguyton said…
Well done Dave! Page 2 of the Southland Times and a great photo (no credit though :-)
This bodes very well for you for your campaign. The media respect your abilities to organise and bring them news.
CUE TV tonight!
April 11, 2011 at 7:33 AM

Thanks for organizing the day, sounds like it went really well.

Laura Lusson said…
No matter what the work is, there's a Chicago Forklift accessible to manage it. Get your company up to snuff with forklift safety video and procedure. Most employers provide the employee with different instructional videos which help the novice forklift operator to understand forklift operations better. The18 wheeler creates each side of the aisle with out turning and it is used in addition to routine pallet storage space.
November 11, 2012 at 10:48 PM