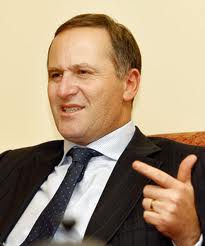 It is common knowledge that the John Key style of governance is very different from Helen Clark's. While Helen made sure that any decision was based on wide ranging advice, Key is very much a solo act and the fact that he wings it on so many crucial decisions is a real concern and this is also true of many of his Ministers. There is also obvious cherry picking of advice and research to support a predetermined position and this is especially noticeable when education academic, John Hattie, is used to support larger school classes but is ignored when he criticizes the National Standards. In the case of the Cafar Farms the Government did accept the advice of the Overseas Investment Office but considering the high interest in the decision one would have thought due diligence would require wider views. That Justice Forrest Miller feels that the Crafar farm decision needs a rethink is a sad indictment on the quality of governance under this National Government.

There are many arguments used to support the Crafar sales that don't stack up and are worthy of proper analysis. The sale of the sixteen farms as one block has justifiably caused concern in the farming sector and Federated Farmers have explained how this has cut out smaller investors within New Zealand. It is already hard enough for our young prospective farmers to get a foot hold in the industry but to deny 16 opportunities to spread farm ownership is flawed thinking. Fewer and fewer farms are in individual ownership and the growing number of large or multiple holdings is exasperating the growing inequities within New Zealand.

Key has countered the concerns about selling to foreign interests by claiming that only 1% of our farmland is owned by those outside the country and more land was sold off in the past. This is misinformation as most of the land sold previously was in forestry and the total land in foreign ownership is thought to be closer to 7%. The fact that we are now selling off prime productive land, when such land is increasingly valuable internationally, ignores the long term value that it has for future generations. We are selling our sovereignty of what could be our biggest asset, our capacity to produce food. Russel Norman has been particularly articulate in making this point.


Although I have posted before on the more sustainable nature of Landcorp's farm management compared to many private owners the fact that they may take over the day to day running does not change the fact that the ownership is elsewhere. There would be no guarantees that the Chinese won't eventually take full control, as they have in Africa, and they have not got a good international record as employers.
Key's claim that the outcry will be seen as racist ignores the protests that occurred when US singer, Shania Twain, first indicated an interest in buying her 25,000 ha property and the fact that the German purchases in Southland occurred under the radar due to a slow accumulation of individual properties.

It is simplistic thinking to promote the view that because we are a small country with limited access to development finance that the answer lies largely in foreign investment. We have had too many past examples to show that without careful safeguards we are opening ourselves to asset stripping and losing profits overseas. When both National and Labour allowed our railway infrastructure to be almost destroyed and currently watch $9 billion of banking dividends cross the Tasman, I feel seriously concerned about the fate of our farmland.