If John Clarke was Still in New Zealand 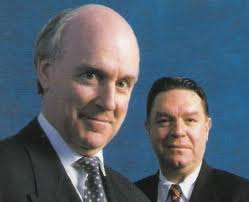 I wish we had the sort of political commentary that John Clarke does in Australia with his satirical send ups of Australian politicians while being interviewed by his mate, and straight man, Bryan Dawe. I am no John Clarke but in the absence of his genius, here is how I think he may portray John Key.

Bryan Dawe: Thank you for coming in this evening, Prime Minister.

BD: Prime Minister I understand you are going to do a major review of our public service.

BD: Surely you must have reviewed the sector before, I mean you've already cut over 3,000 jobs.

JC/JK: Well, sort of a review, Bryan. Bill and I looked at how much they were funded, and well, we spend millions on them and I haven't used any of their services. I was talking to the guys at the club and they hadn't either...

BD: With respect, Prime Minister, how did you establish how much funding should be cut from each department and ministry?

BD: Scientifically? I thought you didn't agree with scientists?

JC/JK: Well that scientist, Mike Joy, for example, I bet he's never had to run a business or had to make make a profit. It's all about balance and sometimes a few snails and the odd river have to be sacrificed for the good of the economy. I mean poor Andy from the club was going to get his usual 50% increase and all this clean river and farmer compliance stuff meant he was only offered 41%, the poor guy was gutted. Anyway we sorted that problem by cutting DoCs budget by $54 million and that fixed the science to a large extent. That's what I mean when I say the decision was purely scientific.

BD: And the cuts to the education ministry, that was scientific too?

JC/JK: Don't be silly, Bryan, you can't deal with those education people scientifically, we used an academic approach with them.

JC/JK: Yes, Bryan, there were so many of them criticizing our National Standards, and some them were asking really tricky questions, it was very annoying. We cut their budget by $25 million and that got rid of quite a few of those academic people. So the decision wasn't scientific it was decided on a purely academic basis. Anne came up with a brilliant idea, and she doesn't have many, for explaining the cuts to the public and teachers- we said it was to improve  frontline services.

BD: And did they?

JC/JK: Hell no, we don't want to support teachers too much or they have time to ask tricky questions, too. That's why we introduced National Standards, most teachers are now spending all their time trying to make them work rather than being annoying. It would be useful if there weren't so many of them but it is quite hard to cut numbers quickly so we have decided to just close the odd school and increase class sizes a little each year. We've had more success with early childhood teachers and we've managed to cut back the qualified ones by 20%.

BD: Thank you for that explanation, Prime Minister, it was very enlightening. Now that we have dealt with how the previous state service review was managed, how are you going to progress this next review?

JC/JK: Well this next one will be much bigger, we'll go beyond the club and canvass at least thirty people.

BD: You mean by including state sector unions?

JC/JK: Hell no, Bryan! We don't talk to unionists, well, apart from that women during the election campaign, but that was an accident... she wasn't wearing a cloth cap or carrying a placard. I mean how can you spot a unionist now? I actually think it is dishonest if they disguise themselves to look like ordinary people.

BD: So who will you talk to?

JC/JK: The people who can make a profit by providing the services we cut of course. Obviously we'll leave those services that aren't profitable and we'll see if we can get volunteers to do those. Wonderful people those volunteers, Bryan, did you know that we have the highest level of volunteering in the world? I guess if you're unemployed you have to do something, and good on them.

BD: So if the public service is reduced even further, will people notice a reduction in service?

JC/JK: Well I haven't noticed any difference after the cuts so far, have you Bryan?

BD: Well actually, Prime Minister, I have noticed that...

JC/JK: Hold on, Bryan, you're not a bloody unionist are you?

JC/JK: You're an ex-teacher aren't you? I should have spotted your tweed jacket...

BD: No I'm not, Prime Minister, but I have noticed that the level of...

JC/JK: That's it, you work for National Radio....I thought we had cut your funding enough to get rid of all the clever interviewers...this is an ambush! (to his EA off stage) Colin, you know I don't do National Radio, we don't even let them have our policies! What's that, Colin? We don't have our own policies? Oh, that's right, we get them from the club...no teachers, scientists or unionists there, eh Colin?