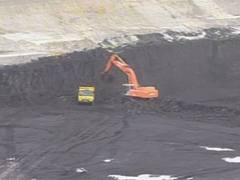 Robina and I were granted time to present our concerns regarding lignite mining to the full council of Environment Southland. We were told that we would be restricted to 10 minutes but the information we provided must have been compelling because our time was extended to 25 minutes. We appreciated the leniency shown by the Council Chair, Ali Timms, to enable us to get the detailed messages across.

Here is the overview of my presentation which was powerfully supported by Robina's powerpoint. Robina had visited farming districts in Australia that were being supplanted by coal mining and her images showing the physical impacts to those communities were very compelling.

Apologies for my difficulties with formatting when transferring from a word document.


Introduction
What is lignite?
Solid Energy’s Plans
Environmental Concerns
·            Water
o   The potential to damage aquifers and water tables are unknown.
o   Little information has been provided on how water will be protected and managed.
o   The fact that the mines will extend below sea level may have unpredicted consequences on water.
o   The potential toxicity of mining sediment has not been assessed and the impacts of such sediment on water is unknown.
o   The viability of the lakes as safe for recreation is unknown. It has been achieved for Lake Weaver in the Waikato from an old open cast coal mine but it does take time.
o   Our rivers and soils are already suffering from excessive urea and the production of more from the lignite could encourage more overuse with an increase in environmental consequences.
·             Dust
o   The lignite is very wet compared to coal and the dust produced is not as great, however dust from the current New Vale Mine still extends some distance from the mine.
·            Noise
o   Farmers living near the current mine can hear the noise from the mine while inside their home and can even hear it when watching their television.
o   As mining is a 24 hour operation the noise will be more obvious at night.
·            Light Pollution
o   Those living next to current mine describe the light at night being similar to living beside a large town.
o   With future mining becoming more extensive the lighting involved will be more noticeable.
·              Roads
o   With increased heavy traffic that will result from transporting the lignite for processing road maintenance in the area will be under greater pressure.
·             Soil
o   Solid Energy intend to restore much of the mined land back into productive farmland, but restoration is hugely difficult and success in other mining areas has been mixed at best.
o   Restoring coalmining land in Queensland, Australia, has been very problematic and establishing viable topsoil afterwards to return the land to previous productivity has so far proved difficult.
o   There is real concern that the Mataura Valley is currently regarded as amongst the best arable land in New Zealand and its future value for food production will be lost.
o   Demand for food is thought to be one of the most pressing concerns globally, especially as we are rapidly losing food producing land at a considerable rate.
o   Our local campaign slogan is “Save the Soil, Leave the Lignite” due the value we place on the true economic future of the area.
·             Carbon Emissions
o   Coal and lignite are the most damaging sources of greenhouse gases that currently exist.
o   Carbon dioxide has a much longer life than gases like methane.
o   Up to 8 billion tonnes of carbon will be released by accessing Southland’s lignite.
o   New Zealand’s current emissions are around 70 million tonnes of carbon, annually, and Solid energy’s plans will increase that by around 20 million.
o   RMA does not include climate changing gases in its scope and the Climate Change response Act has limited authority.
o   Carbon Capture and Storage (CCS) can occur in a limited way by planting trees, but the volumes of carbon produced by lignite mining will far exceed anything that can be managed in this way. Carbon sequestration technology is in its infancy and has been attempted in a minor way through using retired mineshafts or oil wells. The carbon is liquefied then piped into the mine, which is then sealed. Long-term success has yet to be evaluated and leakage has already been identified as an issue.
o   Solid Energy has suggested that the Great South Basin is the most logical source of storage capacity but the technology and expense of achieving that is unknown. It is also dependent on the oil industry establishing itself in the region.
o   The carbon emissions have been identified as the most damaging consequence of mining lignite and the New Zealand Institute has identified in its “New Zealand Report Card” (an organisation that Don Elder supports) that we have amongst the highest carbon emissions per capita for the OECD (26th out of 30). http://www.nzinstitute.org/index.php/nzahead/ Accessing the lignite would possibly make us the worst, hardly good for our “clean, green” image.
o   Diesel produced from lignite has twice the emissions of standard diesel.
o   At the Copenhagen Conference in 2009, New Zealand took responsibility for reducing our annual greenhouse gas emissions to between 10% and 20% below the 1990 level by 2020. Even with the current Emissions Trading Scheme (ETS) and other measures in place, our greenhouse gas emissions are on track to be 30% above the 1990 level by 2020.
Economic Concerns
·
Social/Health Concerns
What we would like to see