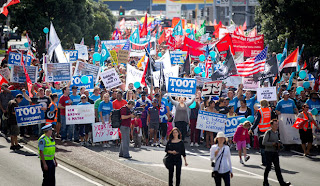 I've just come back from a meeting of the Invercargill Branch of the CTU and having been largely in recess a couple of years ago it is now meeting monthly with most local unions being represented. We started the meeting with organisers and representatives giving a quick overview of what is happening in their sector and it was like a state of the nation overview, but from the perspective of ordinary New Zealanders.

We heard from the MUNZ rep about his experiences supporting his fellow members up in Auckland how amazing it was to feel the support of other unions (including many overseas), political parties and ordinary New Zealanders. The blatant lack of good faith from POAL and the huge losses incurred through the forced inactivity of the port made it very clear that the management were more interested in crushing the union than maintaining profits.

We heard about the Affco's blatant locking out of 480 workers to avoid paying statutory pay for Good Friday and Easter Monday. Talley's, Affco's owners, stand to save hundreds of thousands of dollars through this heavy handed, crass action.

We heard about the Oceania aged care workers who earn barely over the minimum rate and are being refused the DHB funding that is supposed go to their wages. Other rest home providers have passed this funding on to their workers but Oceania is using the money to pay off debt instead.

We heard about the fireman's 18 month negotiations where all offers do not match cost of living increases and casualisation of the service is being threatened.

We heard about the huge cuts to the public service and the stress around constant restructuring and increased workloads.

And finally we heard from the education unions and their concerns about the misinformation being promulgated by the government to create a sense of crisis where none exists. The nonexistent crisis is being used to bring in flawed performance pay measures, Charter Schools and an increase in class sizes.

Familiar themes run through these disputes:

This isn't a simple battle between employers and unions, this is about a concerted attack on ordinary New Zealanders; firefighters, teachers, rest home workers, public servants, watersiders and meat workers. These are people with families and financial commitments, who just want to lead decent lives and be respected and valued for what they do. They are people who want "good faith" to mean good faith, they want a future for their children and they want the state assets created through their taxes to kept in state ownership. These are decent and reasonable aspirations yet the behaviour of many employers and this government is neither decent nor reasonable.
Our meeting attendees discussed how we could provide support for each other in our respective battles and also talked about our shared concern regarding the sale of state assets. In my life time I have never seen such unified commitment across unions, the grass roots are stirring...