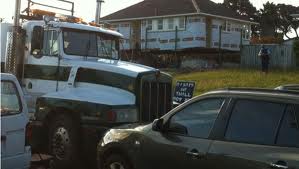 I had hoped we had finally moved on from the police violence of the 70's Dawn Raids, the 1981 Springbok Tour and the more recent anti-terror raids. When the police were asked to remove Occupy protestors from the city centres of Auckland and Dunedin, the police took a very principled stand and refused to do the bidding of the authorities when no public good would be served by such removal. I was especially gratified by Inspector Greg Sparrow's statement that to remove the protestors did not meet "the test of balancing the rights and freedoms of all parties".

Sadly with the Glen Innes protest the police have returned to previous behaviors and used physical force, well beyond what was necessary, to remove people protesting the removal of the homes. They also deliberately roughed up the well known advocate and protestor for human rights, John Minto. Here are some first hand accounts of the police brutality: interview one, interview two.

The Glen Innes state houses being removed are sound homes and the main reason for their removal is that the land values of the area have increased and it has become popular area for more affluent people to live. The occupants of the state houses have been placed into poorer houses in less prestigious areas.

There is no proper planning involved in this process as there have been no extra state houses built to accommodate those being removed from their homes. The only people who look to benefit immediately from the process are the developers who will be able to take advantage of the availability of land in an area of growing values. A stable and strong community is being dismantled to support the growing wealth of New Zealand's rich elite yet again. Apparently poor people don't deserve to live in communities of growing affluence.